AL-KAFI #1609: SITUATIONS WHEN IT IS SUNNAH TO PERFORM THE PROSTRATION OF GRATITUDE 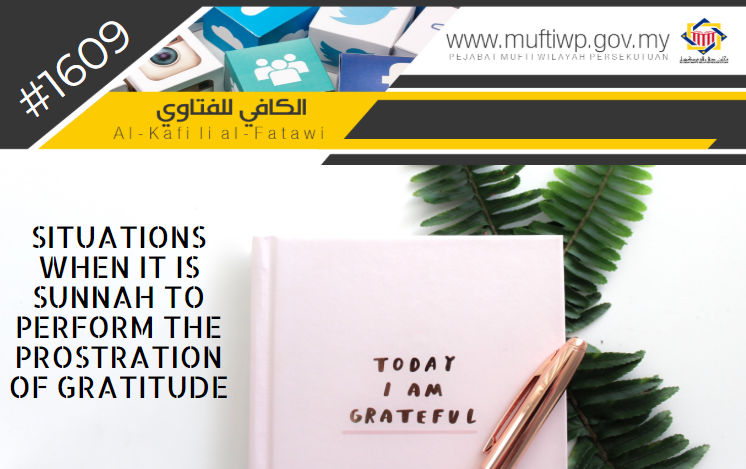 Assalamualaikum, SS Mufti. I would always perform the prostration of gratitude every time I completed performing my obligatory prayers. The reason is I’m truly grateful for being given the time and opportunity to still be alive and live in faith as a Muslim. However, I heard that the prostration of gratitude should only be performed when one received a great blessing which seldom happens. Hope for an explanation from you.

And [remember] when your Lord proclaimed, 'If you are grateful, I will surely increase you [in favor]; but if you deny, indeed, My punishment is severe.' "

The above verse explains that Allah SWT will increase the blessings of a believer if he is grateful with his blessings. Hence, among the ways a person showcased his gratitude to Allah SWT is by performing the prostration of gratitude. Prostration of gratitude is performed when a person receives a certain blessing or saved from a disaster. (Refer Hasyiyah Qalyubi wa ‘Umairah, 1/208)

Please refer to our other related articles on the discussion about the prostration of gratitude:

The evidence which states the sanctioning of prostration of gratitude is based on the hadith of the Prophet PBUH from Abu Bakrah RA:

“When anything came to the Prophet (ﷺ) which caused pleasure (or, by which he was made glad), he prostrated himself in gratitude to Allah.”

Scholars have listed several situations when it is sunnah to perform the prostration of gratitude. Among them are:

Which means when receiving an unexpected blessing whether it is a physical form blessing (which can be observed through the naked eyes) such as the birth of a child or return of a missing person or cured from a severe illness or immaterial blessing (that cannot be seen with one’s eyes) such as attaining knowledge or honour in one’s society.

It means saved from an unexpected disaster, such as saved from a collapsed building, flood, an accident or a disaster. (Refer Busyra al-Karim Syarh Muqaddimah al-Hadhramiah, pg. 337)

Third: When Observing/In the Company of a Fasiq (رؤية فاسق)

This means when a person sees a fasiq who showcases his fasiq attribute or a disbeliever or a person is robbing another on the road, then it is sunnah to perform the prostration of gratitude to Allah SWT who saved him from this matter. The reason is fasiq is a form of disaster in religion that the Prophet PBUH taught us a specific supplication so that we are protected from disasters in our religious matter:

And it is sunnah to showcase the act (prostration of gratitude) to the fasiq so that hopefully, he would repent, if the act is safe from any fitnah and harm, however, it is not safe from fitnah or it would exposed him to threats or harm, then it not sunnah. (Refer Busyra al-Karim Syarh Muqaddimah al-Hadhramiah, pg. 337)

Next, if he sees a fasiq, then it is sufficient for him to perform the prostration just once. (Refer Hasyiyah al-Jamal, 1/476)

Third: When Looking at Others Who Are Tested with Illness of Disasters (رؤية مبتلى)

It means a person who is tested with illness or disease on his body or mind is sunnah to perform the prostration of gratitude for it follows the sunnah of the Prophet PBUH who prostrated when he says a sick person. This is stated in a hadith of the Prophet PBUH:

“Indeed, the Prophet PBUH prostrated when he saw a sick person who experiences zamin (continuous illness or old age disease).”

And it is sunnah to hide it (do not showcase the prostration of gratitude) in front of the patient for it may offend the patient.

Besides, it is also sunnah for those who sees another person being tested with an illness to supplicate with the du’a stated in a hadith narrated from Umar al-Khattab RA:

“Praise is to Allah Who has kept me safe from that which has afflicted you and preferred me over many of those whom He has created), will be kept safe from that calamity, no matter what it is.”

Scholars have stated that whoever recites this supplication then he will not face the disaster or illness for as long as he lives. (Refer Busyra al-Karim Syarh Muqaddimah al-Hadhramiah, pg. 338)

Hence, coming back to the question asked, is it permissible for us to perform the prostration of gratitude after every prayer for the continuous blessing we receive?

Imam al-Nawawi said: “And it is not sunnah to prostrate when receiving a continuous blessing for the blessing is endless.” (Refer Al-Majmu' Syarh al-Muhadzzab, 4/68)

Imam Mustofa al-Suyuti said: “And for the rational and are grateful when saved from a disaster or harms that come their way and they do not perform it (prostration of gratitude) every second.” (Refer Matholib Uli al-Nuha, 1/950)

Imam Ibnu Hajr al-Haitami: “And it is excluded to perform prostration of gratitude when receiving a continuous blessing for it would lead to the spending a lifetime in prostration all the time.” (Refer Tuhfah al-Muhtaj, 2/216)

After analyzing the above discussion, in brief, we conclude this issue into the following points:

May Allah SWT give us the real understanding in practising the religion. Ameen.