AL-KAFI #1673: ARE SUNNAH PRACTISES ON FRIDAYS STILL CONSIDERED AS SUNNAH WHEN THE OBLIGATION OF FRIDAY PRAYER IS ABROGATED DUE TO THE COVID-19 PANDEMIC? 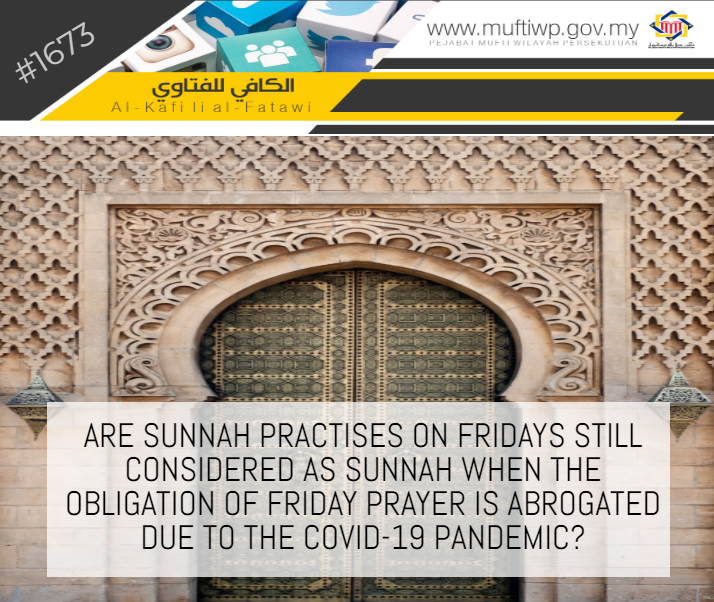 Assalamualaikum. Are the sunnah practices for Fridays is still considered as sunnah when the obligation of Friday prayer is abrogated due to the COVID-19 pandemic?

Hope for an explanation. Thank you.

We already know that there are various international fatwa institutions around the world which has issued a fatwa for the suspension of all congregational and Friday prayers due to the COVID-19 pandemic. Please refer to BAYAN LINNAS SERIES 225: COVID-19: LATEST FATWAS RELATED TO THE SUSPENSION OF THE FRIDAY AND CONGREGATIONAL PRAYERS. Thus, a question arises, what about the sunnah matters practises for Fridays, are they still considered as sunnah if the Friday prayer is suspended?

In answering the above question, we present our answer as the following:

First, Allah SWT will reward a person according to his intention. This is in accordance with a hadith narrated by Saidina Umar al-Khattab RA, where the Prophet PBUH said:

The same is stated in an Islamic legal maxim:

“A matter is according to its intention (purpose).”

Thus, if something is done for the sole sake of Allah SWT and His Messenger, then Allah SWT will reward him, according to his intention.

This is according to a hadith narrated by Abu Hurairah RA, where the Prophet PBUH said:

"The best day on which the sun has risen is Friday. On that day Adam was created, he was admitted to Jannah, and he was expelled therefrom. And on that day, there is a time in which if a Muslim stand in prayer and supplicate to Allah SWT for something he wishes, surely, Allah SWT will grant what he desires."

Thus, the sunnah practises on Fridays are still considered as sunnah such as reciting surah al-Kahfi, take a sunnah Friday bath, filling the day with acts of worship, wearing white clothing and putting on perfumes. These actions are our way of honouring the honoured day which is Friday and following the sunnah of the Prophet PBUH.

Third, Allah SWT is the All-Giving. Indeed, Allah SWT will reward every believer who worships Him sincerely. This is according to His statement:

“Whoever does righteousness, whether male or female, while he is a believer - We will surely cause him to live a good life, and We will surely give them their reward [in the Hereafter] according to the best of what they used to do.”

Imam al-Tabari when commenting on this verse stated, whoever performs acts of obedience and fulfils his promise to Allah SWT when doing righteousness, whether male or female, while he is a believer, which means a person who believes in the promise from Allah SWT and warning for those who commits sins, surely Allah SWT will bless his life. (Refer Tafsir al-Tabari, 14:350)

On another hand, sunnah which are specific and closely related to the Friday prayer itself such as increasing one’s steps to the mosque, arriving early for Friday prayer, listening to the Friday sermon, performing the tahiyatul masjid prayer and iktikaf, then it is no longer possible to perform these actions in our current situation.

However, for the sunnah that is not related to Friday prayer, then it can still be performed such as reciting surah al-Kahfi and others. This is according to a maxim which states:

“When it is beyond a person’s capability to perform everything, then don’t leave all of it or most of it (that he is capable of doing),”

According to the above discussion, we would like to conclude that the sunnah practises on Fridays which are not specifically related to the Friday prayer, is still considered as sunnah such as the sunnah bath on Friday, reciting surah al-Kahfi, increasing dhikr and praise and salutations to the Prophet PBUH and others. The reason is the advantages of the deed depend on the honour of Friday and this is not abrogated even when there is no Friday prayer. However, for sunnah practises that is specifically related to Friday prayer such as walking to the mosque, arriving early to the mosque, listening to the Friday sermon, iktikaf and others, then these sunnahs are no longer applicable when there is no Friday prayer.

Thus, don’t make it so that when just some of the sunnah are no longer applicable, then we leave all of the sunnah. We should fulfil our free time by increasing our good deeds based on our capability and never waste our time with unbeneficial things. May Allah SWT give us sahih understanding in understanding His shariah and guide us to worship Him with sincerity. Amin.