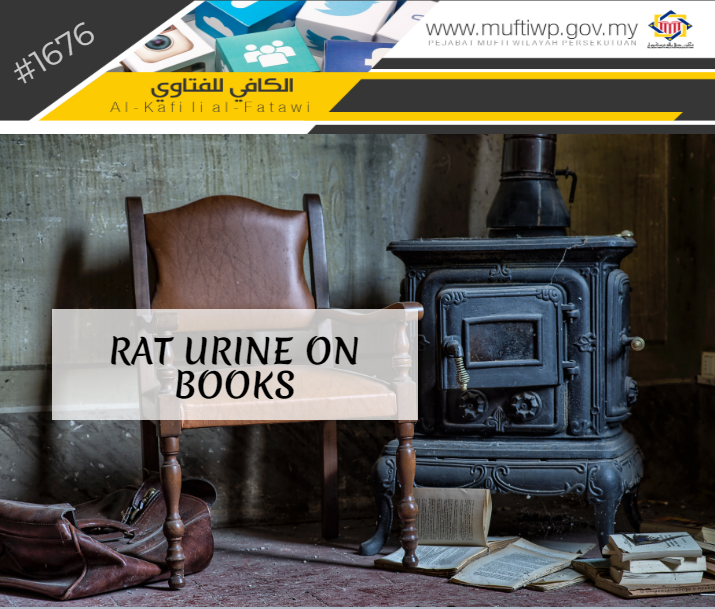 I owned an abandoned house. When I return to that house, I found my books collection which has been nibbled by rats. There is also a strong pungent smell of rat urine in the area where the book collection is. If it is rat urine, how should I clean and purify my books? Thank you.

The first thing that needs to be understood is that rat urine is known to be a carrier of Leptospirosis. Among the symptoms of the infection of Leptospirosis that may be exhibited by the patient are high fever, headache, chills, muscle tense, vomiting, jaundice, eye inflammation, stomachache, diarrhoea, cough and rashes on his skin. Refer Leptospirosis by Kementerian Kesihatan Malaysia.[1]

It is best for the questioner to first refer to the medical doctors on how to effectively disinfect the bacteria which leads to the disease. Whereas, in terms of Islamic ruling, urine of animals except dog and pig is considered as mutawassitah. This type of najis is purified by washing with pure water on the surface affected by najis until the smell, color and taste disappear. The area which is wajib to be purified is only that is affected by najis with certainty by knowing it through its essence or physical attributes like its yellow color and the pungent smell. Whereas areas which are uncertain whether it has or has not been affected by the najis are not wajib to be purified. The Islamic legal maxim said:

Certainty cannot be removed by doubt

“The dalil for this maxim is the saying of the Prophet PBUH:

If anyone of you has pain in his abdomen but is doubtful whether or not anything has issued from him, be should not leave the mosque unless he hears a sound or perceives a smell.

Sahih Muslim (362) from the hadith of Abu Hurairah.

From the al-Sahihayn [Sahih al-Bukhari (137) and Sahih Muslim (361)] as narrated by Abdullah bin Zaid said, there was a person who asked the Prophet PBUH that he had imagined to have passed wind during the prayer, then the Prophet PBUH said:

“One should not leave his prayer unless he hears sound or smells something.”

Al-Suyuti gave an example, one takes ablution from a well for several days and performs salah with the ablution, then he realizes that there is a dead rat in the well. Thus, it is not wajib for him to replace his prayers unless he is certain that he performed it while bearing najis.”

Coming back to the issue of purifying books, normally, the usage of washing with water will tear or damage the books. Therefore, it is not wajib for it to be purified, but it should never be brought in during salah. According to the madhhab of jumhur, urine which is evaporated by the sun until its traces disappear, like its smell, color and taste is still not pure until it is washed, different from madhhab Abu Hanifah and the previous opinion of Imam al-Shafi’e. Refer al-Majmu’ Syarh al-Muhadzzab (2/596). In fact, according to the scholars of Hanafi; Imam al-Hasfaki ruled that rat urine is not considered as najis as it is among things that are out of control. Refer al-Mausu`ah al-Fiqhiyyah al-Kuwaitiyyah (6/32).

However, if one could wash with water without damaging the books, then it is not an issue to do so, only if the action may not cause harm like an infection.

Based on the above facts and statements, we are inclined to state the following:

May this explanation give an answer to the questioner. We pray to Allah SWT to replace this calamity with goodness. Ameen.