AL-KAFI #1719: IS IT SUNNAH TO PAUSE BETWEEN THE RECITATION OF SURAH AND RUKU’ IN PRAYER? 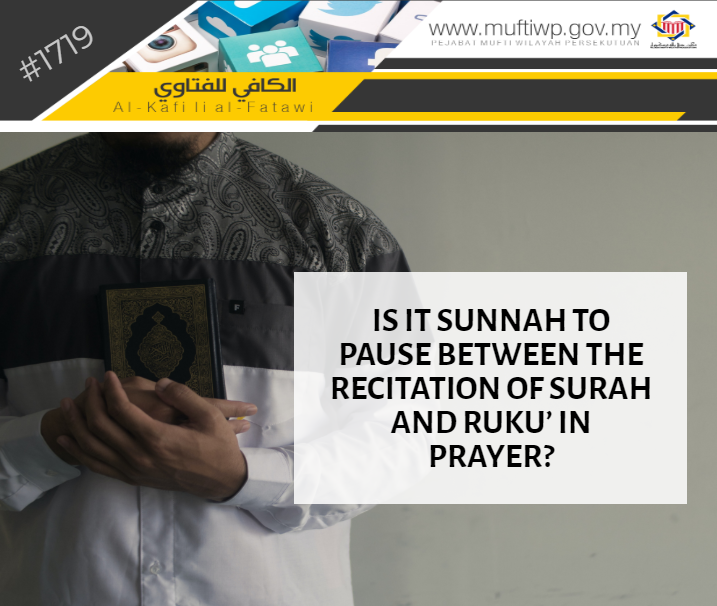 Before we answer the question asked, we would like to first state several places in prayer where it is Sunnah for us to pause. Imam al-Nawawi said according to madhhab al-Shafi’e, it is Sunnah for an imam to pause in jahriyyah prayers on four places as the following:

While Habib Hassan bin Ahmad al-Kaff and al-Sayyid Ahmad al-Syatiri then said that it is Sunnah for a person performing prayer to pause in his prayer at six places. And for each place which is Sunnah for him to pause is for a duration of saying “Subhanallah”. The places are as the following:

Coming back to the question asked, we all know that it is Sunnah for those who perform prayers to pause briefly after finish reciting the surah and before takbir for ruku’, for a very short pause or a duration of saying “Subhanallah”.

This is in accordance with a hadith of al-Hassan al-Basri from the narration of Samurah bin Jundub RA where:

“Indeed, the Prophet PBUH paused (in his prayer) on two places, his pause (the first one) is on the start of prayer (during iftitah) and his pause (the second one) is when he finished reciting the second surah, before he bowed (ruku’). Then that matter was told to Imran bin Husain. He said: “Samurah was lying”. Then he wrote a letter on this to Ubay bin Ka’ab in Medina, but alas Ubay said: “Samurah was saying the truth”.

Among the wisdom of that pause is so that it can be a divider between the recitation of surah and takbir for ruku’ (See al-Tibyan fi Adab Hamalah al-Quran, Dar Ibn Rejab, pg. 93). Likewise, Imam Ibn Qudamah also put a subtopic on after finishing the recitation of surah (other than al-Fatihah). He then cited the statement of Imam Ahmad that:

“Stand and stay still until you are focused before ruku’ and do not combine the recitation (of surah) with takbir to ruku’”. (See al-Mughni, 1/356-357)

Besides, it can be understood from this statement of Imam Ahmad that the pause seems like a sign to the person performing prayer to not hasten and be reckless in performing prayer that it seems like he is combining two different recitations which should be separated, but one should perform prayer with khusyu’ and focus.

Based on the above discussion and arguments, we conclude that it is Sunnah for people performing prayer to pause bruefly after finishing the recitation of surah and before takbir for ruku’, with the shortest pause or for about the pronouncement of “Subhanallah”. Among the purposes is so that the pause can be a divider between the recitation of surah and takbir for ruku’. Besides, it is also a sign and reminder for people performing prayer to not hasten or be reckless in performing it.

We also had discussed on the ruling of an imam pausing a briefly after reciting surah al-Fatihah in the article al-Kafi li al-Fatawi Series-1055.[1]