AL-KAFI #1728: ENDING PRAYER WITH ‘SALAMUN ALAYKUM’, INSTEAD OF ‘ASSALAMUALAIKUM’ 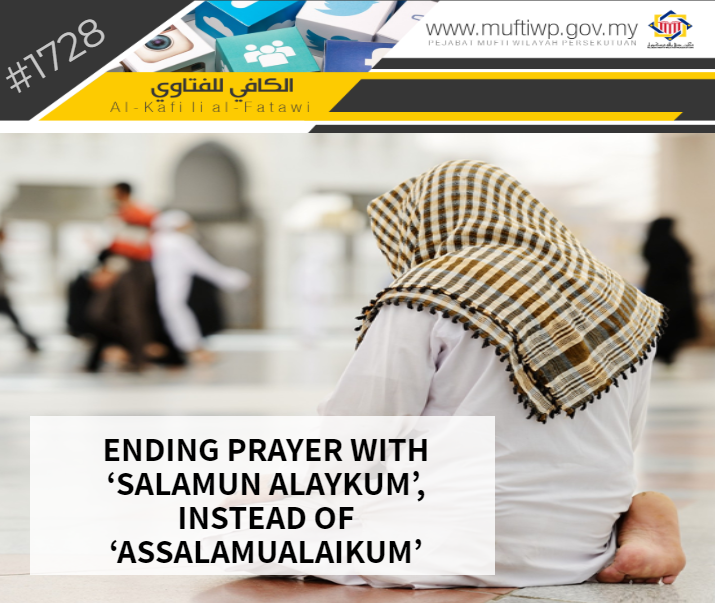 I would like to ask a question. What is the correct salam in prayer? Some just say ‘salamu’alaikum warahmatullah’ without saying ‘as’. Is this permissible? Is there hadith or excerpt from the Quran and hadith?

According to the final opinion in madhhab al-Shaf’e, saying salam to end prayer must be by using ta’rif, which is the phrase Assalamu’alaikum, not Salamun ‘alaikum. According to Imam al-Nawawi, there is a khilaf among the scholars who permit the phrase salamun ‘alaikum with the reason that its ruling is the same as in the tasyahhud, in which it is permissible to be recited with salamun ‘alaika. They said that the tanwin at salamun is aligned with the alif lam in Assalamualaikum. This is the opinion of the majority of the scholars from Khurasan, like Imam al-Juwaini, Imam al-Baghawi and Imam al-Rafie.

However, majority of the Shafi’eyyah scholars like Sheikh Abu al-Hamid, al-Bandaniji, Qadhi Abu Toyyib and al-Nawawi himself reject this by saying that the more sahih opinion is that salamun alaikum cannot be used, in fact, prayer will be invalidated if it is mentioned intentionally. This is because there is no hadith from the Prophet PBUH which mentioned that the Prophet PBUH said salam at the end of prayer with salamun. This is different from the tasyahhud because there is a narration which proves it. In addition, according to Imam al-Nawawi, this is what is cited from Imam al-Shafi’e

Among the hadith which proves that the usage of the phrase Assalamualaikum is the hadith narrated by Abdullah bin Mas’ud RA which said:

This is in line with the hadith narrated by Malik bin Huwairih RA where the Prophet PBUH said:

"Pray as you have seen me praying."

However, according to a weak opinion in madhhab al-Shafi’e and the opinion of scholars from other madhhab like madhhab Maliki and Hanbali, the ruling of saying salam with Assalamualaikum is afdhal (prioritised) while saying Salamun alaikum is still valid and does not invalidate one’s prayer.

Based on the above facts and explanation, we are inclined to the opinion that it is wajib to use Assalamualaikum when ending the prayer according to the final opinion in madhhab al-Shafi’e. It is best for the imam in masjid and surau to use a sahih utterance from the Prophet PBUH and avoid sayings which are questioned on its permissibility to preserve the harmony in the society.

Refer the following article for further explanation: Al-Kafi #1436: The Ruling of Saying the First Salam Twice

May this discussion answer the question. We make du’a to Allah SWT for Him to bestow us with hidayah and inayah to practice His Shari’a accordingly. Ameen.