AL-KAFI #1740: THE RULING OF CHARGING PERSONAL GADGETS IN OFFICE 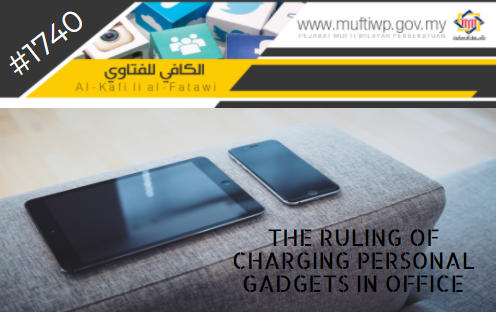 Assalamualaikum. I am sorry to ask; what is the ruling of charging personal gadget in one’s workplace (government office building)? Is it halal or haram? Because we use workplace’s electric supply (which is paid using the tax of the people). Thank you.

The ruling of charging of personal gadget in office is according to the rules of using electricity from the management authority of one’s office. If there is no law that prohibits it, then charging personal gadget in the office is permissible according to the ‘urf (usual practice) because it is considered as a need and its usage is less where no apparent effect is made upon the electricity consumption.

Generally, using or taking something without permission from its owner is prohibited. This is in accordance with the following hadith:

It is narrated from Anas bin Malik RA where the Prophet PBUH said:

“It is unlawful to take other Muslim’s property, unless with his consent”

Even so, there are several things which are closely related to Fiqh rulings that refers to customary and usual practices as long as it does not contradict with Shara’ rulings. Imam Jalaluddin al-Suyuti said that this resembles a person taking fruits that fall on the ground and the like according to the most sahih opinion in which it is decided by local usual practice. (See: al-Suyuti,  al-Asybah wa al-Nazha’ir, 90)

Therefore, charging gadgets in the office (government complex) is permissible according to the ‘urf (usual practice) as long as there is no law that prohibits it because it has become everyone’s need and necessity. Besides, the worker should observe the code of ethics of the respective agencies upon the usage of electricity for personal usage.

Lastly, may we be away of syubhah matters.