AL-KAFI #1763: IS IT SUNNAH TO GIVE THE SECOND SALAM AFTER COMING UP FROM SUJUD TILAWAH? 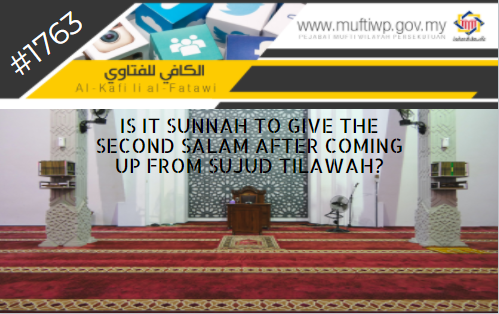 Assalamualaikum. I have a question. Is it Sunnah to give the second salam after coming up from sujud tilawah? It is because based on my observation, many people only gave the first salam. Hope for an explanation.

Sujud tilawah is a sujud which is Sunnah to be practiced due to one finds sajdah verses during his recitation which are the verses of al-Quran stating on sujud. Sujud tilawah is something commendable in the religion towards those who recite verses of tilawah and those who hear them as a sign of bowing and submitting to Allah SWT.

“The conclusion from the methods explained above, there are four requisites for sujud which are intention, takbiratul ihram, sujud and salam.” (Refer: Hasyiah al-Qalyubi, 1/237)

On specific regarding salam. It is wajib because sujud tilawah starts with takbiratul ihram in the beginning, so it needs ‘salam’ at the end like all other prayers. This is in accordance with a hadith:

“The key of prayer is purification, saying ‘God is most great’ makes it a sacred state, and the salutation brings the sacred state to an end.”

Referring to the above question, the scholars state that salam given after coming up from sujud tilawah is the same as salam in any other prayers on its wajib and Sunnah requisites, but it does not require tasyahhud recitation.

“Then (giving salam) is the same as giving salam in prayers on the chapter of matters which are wajib and Sunnah in it”. (Refer: Tuhfah al-Muhtaj, 2/214)

“(And giving salam) is a rukn (which is done) after sitting (coming up from sujud) the same as in prayers but is not required with tasyahhud (recitation of tahiyyat akhir) according to the more accurate opinion”. (Refer: Mughni al-Muhtaj, 1/445)

In fact, Sheikh ‘Abd al-Rahman al-Jaziri stated clearly that it is Sunnah to give the second salam when explaining on the methods of sujud tilawah according to madhhab al-Shafie:

“It is Sunnah to lift both hands during takbiratul ihram. It is also Sunnah to say takbir before going down to prostrate (sujud) and coming up from it as well as reciting du’a while prostrating and giving the second salam.” (Refer: al-Fiqh ‘ala Mazahib al-Arba’ah, 1/424)

As a conclusion, giving the second salam is sunnah while praying the regular prayer. So, it is also Sunnah to do so after coming up from sujud tilawah according to qiyas (analogical deduction) applied on salam in regular prayer.