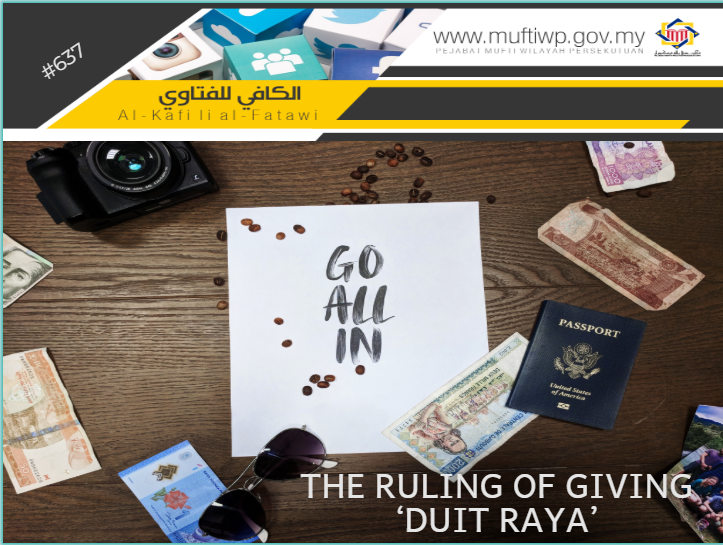 I want to ask regarding the ruling of giving ‘duit raya’. Is there any element of tasyabbuh (resemblance) with the norm of giving ang pow among Chinese community?

Alhamdulillah, praise and thanks to Allah for the countless blessings He has blessed us all with. Blessings and salutations to the prophet Muhammad PBUH, his family, companions and all those that follow his teachings to the day of judgement:

It is undeniable that Hari Raya (Eid) is a part of Islam and a special celebration for the Muslim community where they express happiness and gratitude. This is said by Imam Al-Hafiz Ibn Hajar Al-Asqalani rahimahullah: “Expressing the feeling of happiness on Eid festivities are one of the syiar (eminence) of Islam”. Refer Fath Al-Bari, Ibn Hajar (2/514)

There are also excerpts from Al-Quran and hadith stating this. One of them is a hadith narrated by Ummul Mu’minin A’isyah RA, where she said:

Imam Al-Nawawi Rahimahullah places a hadith which has almost the same wording as the above hadith under the chapter; Chapter on Stating the Permissibility of Enjoying Entertainment Where There are No Sins or Transgressions in it During Eid Festivities.

This is because the situation happened during Eid which is the day of happiness and enjoyment. That is why the Prophet PBUH ordered Abu Bakr Al-Siddiq RA to let the two women sing on that particular day. The Islamic jurisprudence’s conclusion that can be drawn from the above hadith is, as long as the action is meant to express happiness during festivities and it does not contradict the syara’, then it is permissible.

The Custom of Giving Money

In our opinion, the concept of giving ‘duit raya’ to parents, relatives as well as children on the 1st syawal is in accordance with the act of giving sadaqah in Islam. In fact, giving sadaqah to parents is among the best conduct as it produces three other act of worships which are birrul walidain (doing a good deed to parents), strengthening silaturrahim as well as the reward of sadaqah itself.

As for the case if it is given to relatives, family members and so on. The action is also rewarded with two types of rewards which are sadaqah and strengthen silaturrahim. This is congruent with what was said by the Prophet PBUH as narrated by Sa’d bin Abi Waqqas RA:

"You will be rewarded for whatever you spend for Allah's sake even if it were a morsel which you put in your wife's mouth."

The Issue of Tasyabbuh (Resemblance)

Pertaining to the issue of tasyabbuh (resemblance) between duit raya and ang pow which is given during the Chinese festivities, we, however, do not see any resemblance between these two. This is because, the giving of duit raya has its basis in Islamic perspective, in which it is considered as sadaqah, so it is Sunnah. Hence, there is no issue of resemblance in this. Meanwhile, the usage of envelope for 'duit raya’, is taken back to its original ruling as mentioned in Islamic legal maxim:

Based on the pieces of evidence and judgements brought upon for this issue, we would like to state that the ruling of giving duit raya to relatives and neighbors who visited our house on 1st syawal is permissible. This is in line with the effort of expressing the syiar of Islam through the happiness of giving and receiving sadaqah, strengthening silaturrahim, as well as the custom of visiting each other.

We also would like to suggest some guidelines (dhawabit) as follows:

To end, may this writing able to give a better understanding to those who read it. Ameen.