BAYAN LI AL-HAJ SERIES #2: THE MEANING OF HAJJ AND UMRAH AND THEIR DIFFERENCES 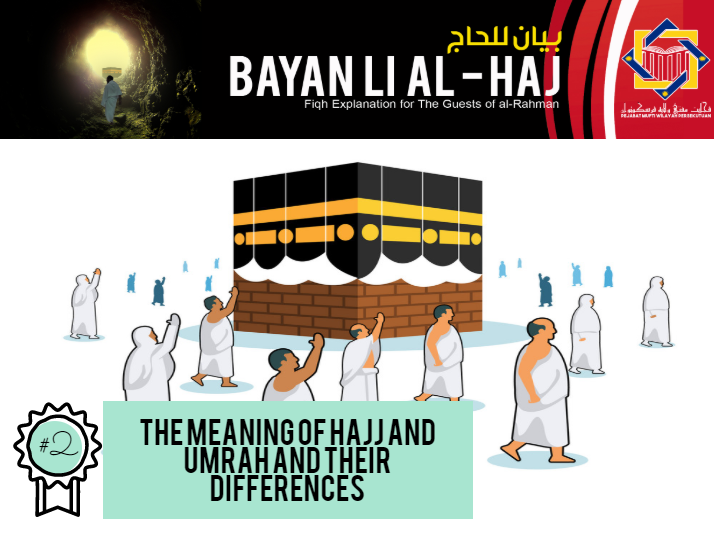 What is the meaning of hajj and umrah what differentiates them?

According to the above question, the meaning of hajj and umrah are:

Hajj literally means pilgrimage or travel to a certain place. While the term is used for a pilgrimage to Baitullah (Kaaba) in certain times (the month of hajj, Zulhijjah) and perform the obligatory acts of worships of hajj. (Refer al-Mausu’ah al-Fiqhiyyah, 17 / 23)

Hajj is one of the pillars of Islam and an obligation for each Muslim, whether a man or a woman who are capable, where it is obligatory only once in a lifetime and if someone performs it more than once, then, the rest is considered as sunnah.

Among the evidence of the sanctioning of hajj is as mentioned in the Quran:

Istito’ah (capability) meant in the above verse is not solely physical capability. For it is already known that Allah SWT will not burden someone of things that he is incapable of performing. (Refer Al-Muhalla, Ibn Hazm 7/54 and Subul al-Salam, Al-Son’aani 2/180)

Imam Ibnu Kathir Rahimahullah said: “As for istato’ah (capability) it is the capability of someone in terms of performing hajj for himself and others.” (Refer Tafsir al-Quran al-Azim, 1/364)

“And proclaim to the people the Hajj [pilgrimage];”

“Hajj is [during] well-known months, so whoever has made Hajj obligatory upon himself therein [by entering the state of ihram], there is [to be for him] no sexual relations and no disobedience and no disputing during Hajj.”

Whereas for the meaning of umrah, it is as the following:

Umrah literally means a visit, while the majority of scholars have agreed that it means tawaf in baitullah and saie between safa and marwah when one is in the state of ihram. (Refer Al-Mausu'ah al-Fiqhiyyah, 30/314)

Some scholars hold the opinion that it is obligatory for someone to perform umrah if he has never performed it and he is capable to do so.

“And complete the Hajj and 'umrah for Allah.”

This is the authentic opinion from madhab Imam al-Syafie, however, some scholars such as Imam Malik and Imam Abu Hanifah said that it is sunnah muakkadah to perform the first umrah. (Refer al-Mausu'ah al-Fiqhiyyah, 30/ 315)

The following are the simplified differences of hajj and umrah:

Hopefully, our short explanation regarding hajj and umrah will add some of the readers’ and future pilgrims’ knowledge regarding this matter. We hope that all of our worship and good deeds are accepted by Allah SWT and we pray that for those who are performing hajj to be granted a mabrur hajj and their hajj is accepted.

Among the signs that the hajj performed is mabrur is that when they returned, he become humble and zuhud in the worldly matters and race in doing good deeds and worships for the hereafter. We hope that we are among these people.

We end this series of Bayan li al Hajj with the following supplication:

“O Allah, grant us with a mabrur hajj, gratefulness in our efforts and forgiveness for our sins.”