IRSYAD AL-HADITH SERIES 73: THE RULING OF FASTING IN THE SECOND HALF OF THE MONTH OF SYA’BAN 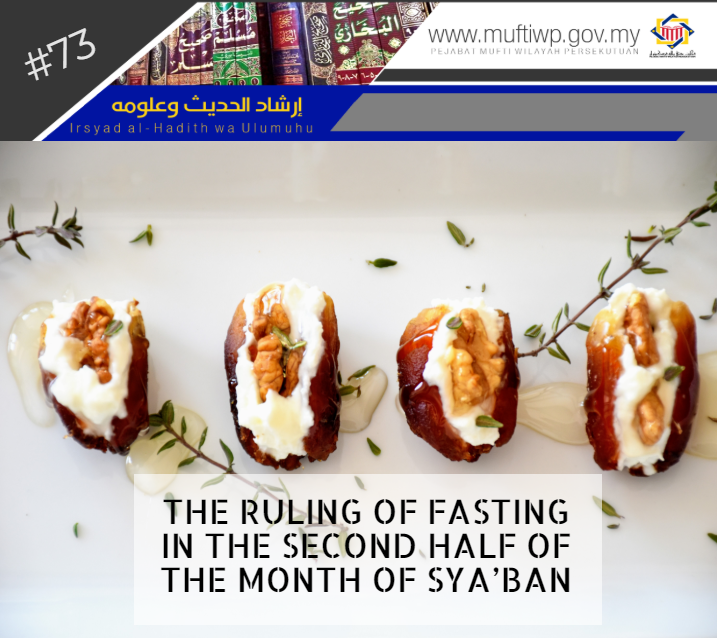 Is it permissible to fast after fifteen days of Sya’ban have passed?

Regarding the issue that is going to be discussed today, it is an important issue that always came up when we are nearing the month of Ramadhan. Thus, in this series of Irsyad al-Hadith we will discuss the issue of fasting in the last two weeks of Sya’ban.

"When it is the middle of Sha'ban do not fast.”

"When it is the middle of Sha'ban do not fast (until it is Ramadan).”

When it is the middle of Sha’ban, eat until Ramadan comes.

"When a half of Sha'ban remains then hold yourself from fasting until Ramadhan comes."

There are differences of opinions among scholars regarding the status of this hadith. Some of them said it is sahih while others evaluated it as dhaif (weak).

First opinion: Among the scholars who evaluated the hadith as sahih are:

Second opinion: Among the scholars who ruled the hadith as dhaif:

According to the opinions of scholars regarding the status of this hadith, thus, we are inclined to state that the hadith is dhaif although it is stated as sahih by some of the scholars. Among the reasons we are inclined to say this are due to several factors:

"None of you should precede Ramadhan with a day or two of fasting before the (beginning of the) month of Ramadan,”

However, we are also of the opinion that it is permissible for whoever who wants to fast after the middle of Sya’ban if he is someone who always performs sunnah fasting such as fasting on Mondays and Thursdays. The same applies to those who always fast on white days (أيام البيض) and those who practise the fast of the Prophet David AS. This is the opinion of the majority of scholars in this issue.

The restriction stated in the hadith is for those who don’t usually perform sunnah fasting. As for anyone who has always fasted, then it is not an issue for him to fast during the stated time. (See Fath al-Bari, 4/215)

The following are the opinions of scholars on this matter:

The Wisdom Behind the Impermissibility of Fasting

Furthermore, if we consider and hold onto the opinion that the hadith is sahih as stated by some of the scholars, then there are wisdom as to why it is impermissible to fast during this time. Among the wisdom is so that the Muslim ummah can prepare themselves before facing the month of Ramadhan, where in this month every mukallaf Muslim is obligated to fast for a whole month.

To conclude, we would like to reaffirm that it is permissible to fast after the 15th of Sya’ban for the hadith which restricts it is weak and contradicts a sahih hadith. Especially if a woman wants to fast to replace her Ramadhan fast the preceding year, then it is a commandment. The reason is Saidatina Aisyah R.Anha herself replaces her Ramadhan fast in the month of Sya’ban. Lastly, may Allah SWT grant us the strength and time to perform our worships to its perfection. Amin.