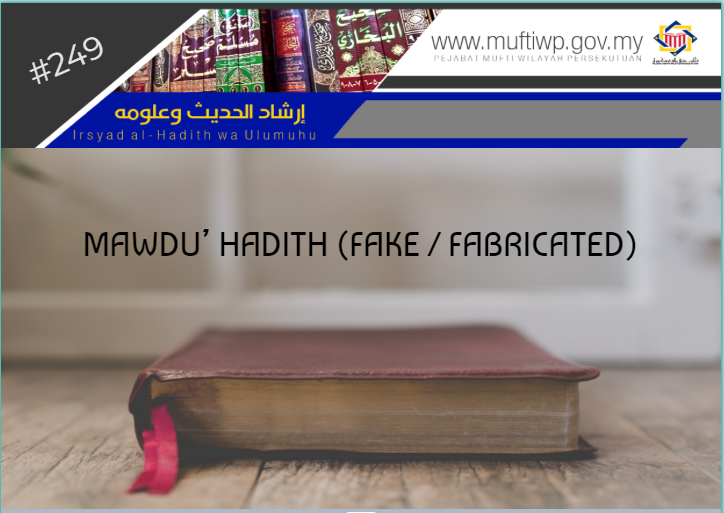 What is meant by mawdu’ hadith?

"Whoever (intentionally) ascribes to me what I have not said then (surely) let him occupy his seat in Hell-fire."

'"Whoever narrates a Hadith from me thinking it to be false, then he is one of the two liars." (Either the one who invents a lie or the one who repeats it; both are liars).

According to the historians, the beginning of the fabrication of the Prophet PBUH’s saying started when there was a fitnah which led to the killing of Saiyidina Uthman bin Affan RA. This is because, during that time, there was a rise of the al-Ahwa’ (people who follow their desire) when schism and disputes took place and these led to the lies in the name of the Prophet PBUH so that the fabricated hadith will be in line with their own desires.

The Position and Definition of Mawdu’ Hadith

The position of mawdu’ hadith is it is the worst of dhaif hadith as stated by the scholars like:

“Mawdu’ hadith is hadith which is made or created and it is the worst dhaif hadith.” [See: Tadrib al-Rawi, 323/1]

Before we discuss in detail regarding mawdu’ hadith, it is best if we first understand the definition of this mawdu’ hadith. Imam al-Baiquniy states in his popular manzhum on mawdu’ hadith:

In the name of the Prophet PBUH is named Mawdu’ Hadith

According to Imam al-Baiquniy, mawdu’ hadith is a fabricated hadith which are created or invented and is said to be the words of the Prophet PBUH. Besides, Syeikh Sayyid Abd al-Majid al-Ghouri in his book stated that mawdu’ hadith is:

“Hadith which does not come from the Prophet PBUH whether in the form of words, actions, taqrir and it is said as the Prophet PBUH’s accidentally, intentionally, due to ignorance and deceit.” [See: Mu’jam al-Musthalahat al-Hadithiyyah, 798]

The Ruling of Narrating Mawdu’ Hadith

The scholars state that it is impermissible or haram for us to narrate mawdu’ hadith when it is known of its condition (the fabrication) except to explain on the fabrication. This is the opinion of Imam Ibn Salah, Imam al-Nawawi, al-Suyuthi (911h) and many other scholars including contemporary scholars of hadith. This ruling is decided due to the great prohibition from the Prophet PBUH on lying in his name. However, this ruling does not apply on dhaif hadith as it still can be narrated in fadhail matters when the conditions are fulfilled as stated by al-Hafiz ibn Hajar al-Asqalani and we already explained this in our previous article under the title of dhaif hadith.

Characteristics or Signs of Mawdu’ Hadith

Matters which may be traced either in sanad and matan of the hadith and we cited them from the book Ulum al-Hadith by Prof. Dr Muhammad Abu Laith, which are:

The Purposes of Creating Mawdu’ Hadith

Among the purposes of creating or inventing the hadith are:

Here we cite again some articles we have already written before on the terminologies of mawdu’ hadith. Among the common terminologies used by the scholars in stating the status of a certain hadith are:

Among the books which gather and explain on mawdu’ hadith are:

Our Obligations and Roles

As a believer who loves the Prophet PBUH, we should preserve the name and physical character of the Prophet PBUH from the falsehood and fabrication of those with bad intentions. This is a proof of our love towards him as stated in a hadith:

"None of you will have faith till he loves me more than his father, his children and all mankind."

Besides, it is our duty before reading, writing, teaching, delivering or spreading a particular hadith of the Prophet PBUH to verify its source and status because there is concern that by not stating the source and status, we may be included in the warning of the Prophet PBUH. By doing this, we may preserve the purity of this religion from the deviation of those wanting to attack Islam.

In conclusion, mawdu’ hadith is the worst level of dhaif hadith as we mentioned above. Besides, the ruling of narrating mawdu’ hadith is haram except to state its fabrication and its effect of being thrown in the hellfire afterwards. Lastly, hopefully, with this brief explanation, it can give some understanding to us about the meaning of mawdu’ hadith as well as how to identify it. May Allah SWT give us understanding in this religion as well as guarding our tongue from committing any falsehood in the name of the Prophet PBUH. Amin.