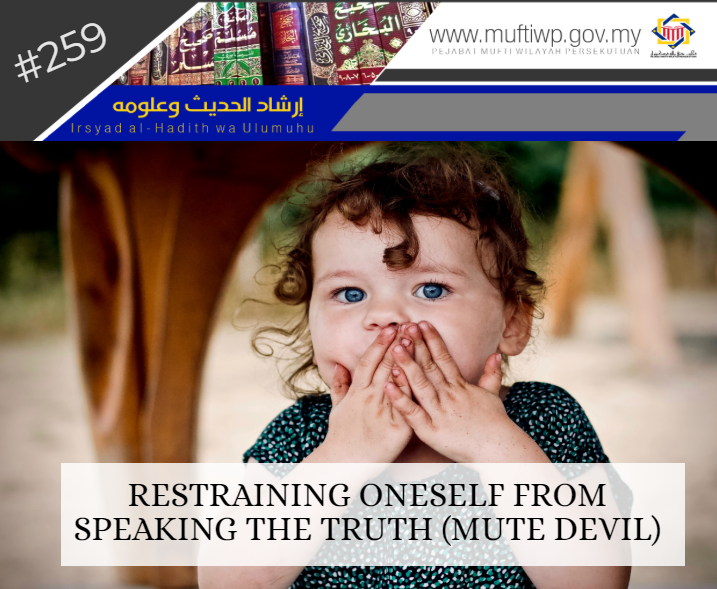 What is the status of the following statement?

“Anyone who retrained himself from speaking the truth is a mute shaytan (devil) while a person who speaks of falsehood is a talking devil.”

Islam is a religion which emphasizes on matters of al-Amr bi al-Ma’ruf (calling towards goodness) and al-Nahl an al-Munkar (preventing the mungkar (bad things)). This is in accordance with numerous statements of Allah SWT:

“And let there be [arising] from you a nation inviting to [all that is] good, enjoining what is right and forbidding what is wrong, and those will be the successful.”

According to the above verse, it is clear to us that an obligation of a believer or a Muslim is to call towards the good and what is right and to prevent anything bad and wrong (mungkar). Furthermore, there is a sahih hadith which commanded us to prevent any mungkar:

According to the above statement, we are inclined to state that the meaning of the mentioned statement in the question is sahih (true) for we should not keep quiet when there are sinful or mungkar matters that are happening in front of us. However, we did not find the statement in any renowned hadith books of which it is said to be from the Prophet PBUH. Thus, we should never say that it is from the Prophet PBUH because it may possibly be the words of Muslim scholars.

Furthermore, Imam al-Nawawi (676 H) narrated from Abi al-Qassim al-Qusyairi and these words are said to be from Abi Ali al-Daqqaq who said: “Whoever restrained himself from speaking the truth, then he is a mute devil.” (See al-Minhaj Syarah Sahih Muslim, 20/2)

To conclude, the statement is not the words of the Prophet PBUH and saying that it is, is an offence and is included as lying in the name of the Messenger PBUH. Moreover, we are commanded to speak out in matters of sin or transgression. The reason is the responsibility of al-Amr bi al-Ma’ruf and al-Nahl al-Munkar is an obligation on every individual who declares himself as a believer to Allah SWT and His Messenger. By staying silent in mungkar matters, it would lead to the punishments of Allah SWT according to several hadiths, among them is a statement of the Prophet PBUH:

“If acts of disobedience are done among any people and do not change them though they are able to do so, Allah will soon punish them all.”

Lastly, may Allah SWT give us the strength to call people towards good and prevent them from disobedience and make us from among His best slaves. Amin.