IRSYAD AL-HADITH SERIES 353: HADITH ON STRAIGHTENING OF THE SAF 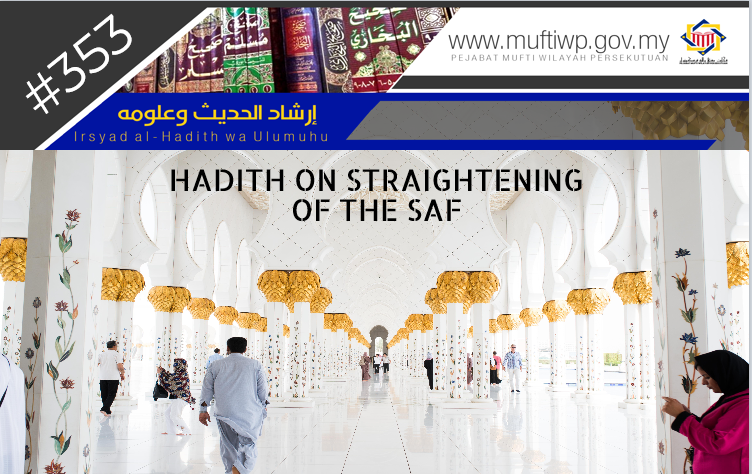 Is it true that the Prophet PBUH would always utter the statement that the imams always said before prayer?

“Straighten the saf for straightening the saf is included as the perfection of prayer,”

Straightening the saf is included as one of the manners of congregational prayer. It is sunnah for the imam to not begin the prayer until the saf is straightened and it is also sunnah for him to instruct the makmum behind him to straightened the saf. As for huge mosques, then it is sunnah to appoint someone to ensure all the saf are straightened by inspecting or instructing in a loud voice. It is also sunnah for everyone in the congregation to ask for the saf to be perfected if there is imperfection in the saf. The reason is, it is included as amar makruf and helping in good deed and piety where the perfection in the saf is included as the perfection of prayer. (See al-Muktamad, 439/1)

There are several hadiths which explained the importance of straightening the saf and the consequence if it is neglected. Among them are:

The Messenger of Allah (may peace he upon him) used to touch our shoulders in prayer and say: “Keep straight, don't be irregular, for there would be dissension in your hearts.”

"Straighten your rows or Allah will alter your faces."

According to the above question, there are numerous hadiths that narrate on the instruction of the Prophet PBUH to straighten the saf before praying, among them are:

“Straighten your rows. for the straightening of a row is a part of the perfection of prayer.”

"Straighten your rows as the straightening of rows is essential for a perfect and correct prayer. "

"Arrange the rows in order, stand shoulder to shoulder, close the gaps,”

The above are some examples of the hadiths that state the commandment of the Prophet PBUH to straighten the saf to his companions before the Prophet PBUH begins the prayer. However, if an imam uses other words, then it is not an issue as long as the statement convey the meaning meant which is to straighten the saf. Moreover, Imam al-Nawawi state that this hadith proves the encouragement of straightening the saf and the permissibility of talking in between the iqamah and prayer. This is the opinion in our madhhab (madhhab Syafie) although there are scholars who prohibit it (talking after iqamah). However, the accurate opinion is that it is permissible to tallkregarding matters that are related to prayer or otherwise. (See al-Minhaj, 157/4)

The Meaning of Straightening the Saf

Imam al-Iraqi cited the opinions of scholars in understanding the meaning of straightening the saf, which is:

The Stories of the Salaf al-Soleh (Past Righteous People)

“As for him (Saidina Umar), he appointed several men to straighten the saf. He will not perform the takbir (takbirat al-Ihram) until he is informed that all the saf is straight.”

“As for Bilal, he would hit our legs before beginning the prayer and straightened our shoulders.”

To conclude, any words said by the imam to straighten the saf of the makmum is considered as the sunnah of the Prophet PBUH. Thus, every imam should play his role in this matter before beginning the prayer. If he is incapable, then he can appoint another person to fulfil this responsibility. Lastly, may Allah SWT give us understanding in this religion. Amin