IRSYAD AL-HADITH SERIES 375: THE RECITATION OF THE PROPHET PBUH IN FRIDAY PRAYER 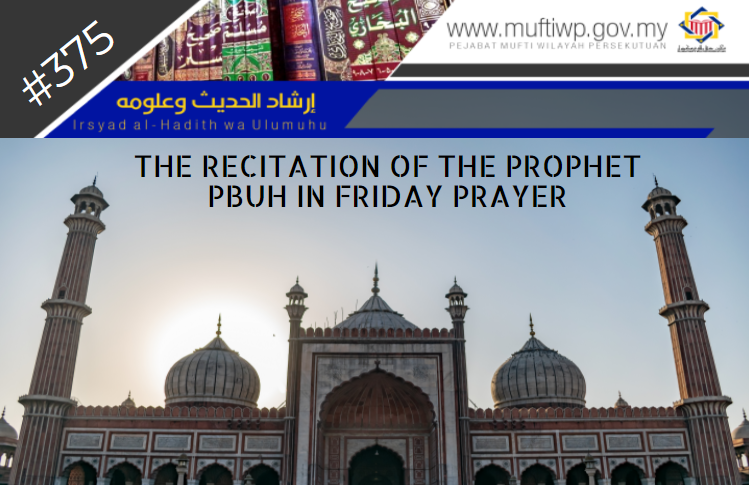 Are there any specific recitations that the Prophet PBUH would recite in his Friday prayer?

Friday is an honoured day in Islam. The reason is there are numerous hadiths that narrates the advantages of this day. According to the above question, we would like to present several texts of hadiths regarding the recitation of the Prophet PBUH in Friday prayer. Among them are:

“Abu Hurairah led us in the Friday prayer and recited Surah al-Jumu'ah and "When the hypocrites come to you" (63) in the last rak'ah. He said: I met Abu Hurairah when he finished the prayer and said to him: You recited the two surah that 'Ali used to recite at Kufah. Abu Hurairah said: I heard the Messenger of Allah (ﷺ) reciting them on Friday.”

Imam Abu Hanifah and his ashab stated as narrated by Ibn Abi Syaibah in his Musannaf from al-Hasan al-Basri; an imam is permissible to recite anything in his prayer (without any specific recitations). Furthermore, Ibn ‘Uyainah stated it is makruh to purposely recite only the recitation of the Prophet PBUH in his Friday prayer (only recite the same surah). The reason is the person would make it as if the action is sunnah while this is not so. (See Aun al-Ma’bud, 3/333)

In this issue, in our opinion, it is sunnah for an imam to occasionally recite these surahs in Friday prayer. The reason is the Prophet PBUH never did this or recite it every week. Moreover, the imam is also permissible to recite other surahs. This is crucial for there is a concern that the society would misunderstand and think that it is wajib if it is recited every week. Furthermore, it depends on Fiqh consideration of the imam himself, for he is responsible to consider the people following him. This is in accordance with a hadith of the Prophet PBUH which is a guide who intends to pray with others.

"If anyone of you leads the people in the prayer, he should shorten it for amongst them are the weak, the sick and the old; and if anyone among you prays alone then he may prolong (the prayer) as much as he wishes. "

To conclude, following or practising the sunnah of the Prophet PBUH is a commandment in Islam. Lastly, let us train ourselves to always perform the five obligatory daily prayers in congregation in mosques and may Allah SWT accept our prayers especially in this blessed month of Ramadhan. Amin.