IRSYAD AL-HADITH SERIES 404: THE MEANING OF TARWIYAH DAY AND ITS ADVANTAGES 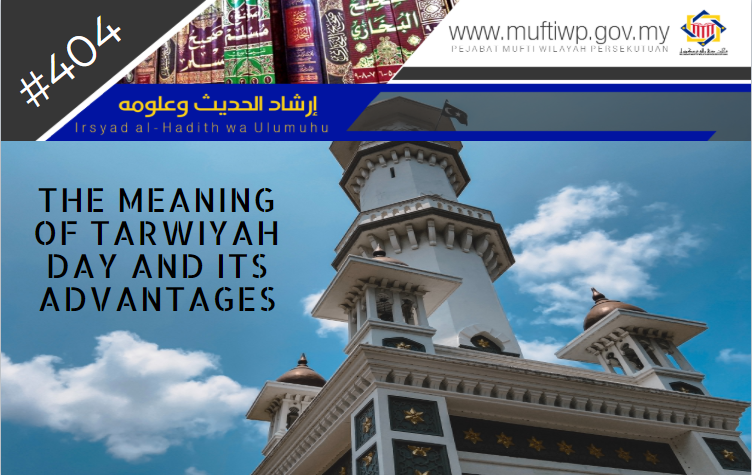 What is the meaning and advantages of tarwiyah day?

We are still in the first 10 days of Zul al-Hijjah and the first ten days’ advantages is generally known for they are the most beloved days by Allah SWT for anyone who performs acts of worship on these days. This is according to a sahih hadith:

Furthermore, the eighth day of this month is also named as Tarwiyah day. Thus, in this series of Irsyad al-Hadith, we will discuss and explain the advantages of Tarwiyah day.

Imam Ibnu Qudamah explained that the day is named as Tarwiyah because of two reasons:

Thus, Tarwiyah day has two meanings according to Imam Ibn Qudamah, one is the day the hajj pilgrims prepare their water supply before heading towards the Arafah and second, the day when the Prophet Abraham AS dreamt about slaughtering his son Prophet Ishmael AS and this made him wonder and question himself.

This hadith is narrated by Imam al-Dailami in his book Musnad al-Firdaus (2/248). Scholars have differing opinions in evaluating this hadith. Some of them state the hadith as dhaif (weak) as evaluated by Imam al-Busiri. Furthermore, there is narrator in its sanad who is known as a liar. And another narrator who is stated to be majhul (unknown). The reason is Imam Ibn al-Jauzi, Imam al-Syaukani and Imam Ibn ‘Arraq al-Kinani evaluated this hadith as fake.

Thus, we are inclined towards the opinion that state this hadith is not sahih for there are narrators of the hadith who is a liar and another who is majhul.

However, some scholars evaluate this hadith as dhaif (weak) and used this hadith to support there are specific advantages of fasting on Tarwiyah day. The reason is there are scholars who ruled it permissible for a person to practice a dhaif hadith in fadhail al-a’mal matters as long as it does not involve matters of aqidah or rulings.

To conclude, Tarwiyah day is the eight day of the month of Zul al-HIjjah and there is no mention of specific worship that should be performed on this particular day in any sahih hadiths. Lastly, may Allah SWT accept all our worships and good deeds in these beloved days of Allah SWT. Amin.