IRSYAD AL-FATWA HAJJ AND QORBAN SERIES 17: THE DIFFERENCE IN DETERMINING THE DAY OF ARAFAH AND FASTING ON THE DAY 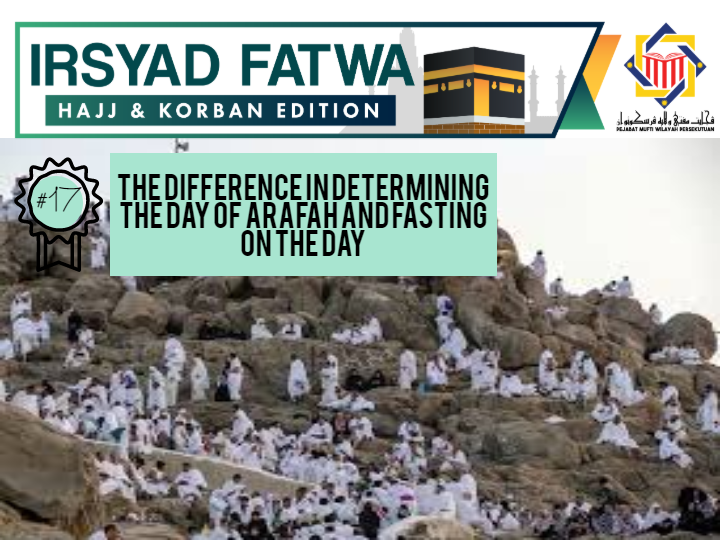 Is there a difference in the determination of the day of Arafah which affect the day of which it is sunnah to fast and for people to perform wukuf?

The determination of the day of Arafah depends on when is the 1st of Zulhijjah itself. Thus, there will be clear differences for certain places due to the difference of matholi’ which is when the new moon is sighted.

In the issue of moon sighting, there are differing opinions among scholars. Due to this difference of opinion, results in the following opinions:

This is also the opinion of Syeikh al-Islam Ibn Taimiyyah Rahimahullah and Syeikh Ibn ‘Uthaymeen Rahimahullah. It is in accordance with the following hadith:

“That Umm al-Fadl, daughter of al-Harith, sent him to Mu'aqiyah in Syria. He said: I came to syria and performed her work. The moon of Ramadan appeared while I was in Syria. We sighted the moon on the night of Friday. When I came to Median towards the end of the month (of Ramadan), Ibn 'Abbas asked me about the moon. He said: When did you sight the moon? I said: I sighted it on the night of Friday. He asked: Did you sight it yourself? I said: Yes, and the people sighted it. They fasted and Mu'awiyah also fasted. He said: But we sighted it on the night of Saturday. Since then we have been fasting until we complete thirty days or we sight it. Then I said: Are the sighting of the moon by Mu'awiyah and his fasts not sufficient for us? He replied: No. The Messenger of Allah (ﷺ) commanded us to do so.”

We are inclined towards the first opinion for the basis of the argument is in accordance with other wajah istidlal (indication) of evidence. It is also in line with a renown Islamic legal maxim:

“The decision of a judge (ruler) removes the khilaf (difference of opinions by scholars).”

This means the decision made by the ruler of a place should be followed and obeyed in order to maintain the peace and showcase the spirit of unity among Muslims in performing worship.

According to the above example, then Arafah day (wuquf) which is 9th Zulhijjah falls on a Sunday, 11th September 2016. On the date, it is sunnah for those who are not performing wuquf to fast and those who do will receive a great reward as stated in a hadith of the Prophet PBUH:

“Fasting on the Day of ‘Arafah, I hope from Allah, expiates for the sins of the year before and the year after.”

Al-Imam al-Nawawi Rahimahullah in Al-Minhaj Syarh Sahih Muslim (2nd edition, 2/51), commented on the above hadith stating that for those who fast on the day of Arafah, all of his sins for two years are forgiven. And the sins meant here is minor sins and not major sins.

The Issue of Fasting on Sundays

It is permissible to fast on Sundays; without it be accompanied by another fasting on the previous or following day for the fast has a reason, which is in accordance with the encouragement of fasting on Arafah day which just coincidently falls on a Sunday in Malaysia.