IRSYAD AL-FATWA SERIES RAMADHAN EDITION 147: A PERSON BREAKS HIS FAST BECAUSE HE WAS TRAVELLING THEN HAD INTERCOURSE AFTER HE ARRIVES HOME; IS HE FINED WITH KAFFARAH? 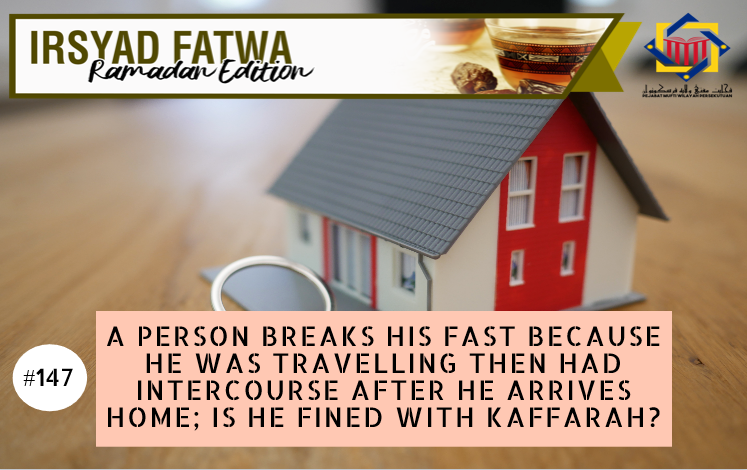 Rukhsah (facilitation) is given for those who experience a debilitation or have an excuse permitted by syara’. To break his fast and one of them is permissible travel. This is as stated by Allah SWT:

“So, whoever among you is ill or on a journey [during them] - then an equal number of days [are to be made up].”

What is meant by rukhsah for traveller is for any journey which exceed two marhalah (85 km) and when it is permissible to perform the jamak and qasar prayers. (See al-Fiqh al-Islami wa Adillatuhu li Zuhaili, 3/1695)

If a person breaks his fast because he is travelling, then it is wajib for him to replace (qadha’) the days of which he missed. And it should be replaced as soon as possible without delaying it until the following Ramadhan begins. (See al-Mausua’h al-Fiqhiyyah al-Kuwaitiyyah, 28/75-76)

If it is permissible for a person to break his fast (permitted by syara’) in the beginning of the day of fasting like having menstruation, travelling or ill, then the excuse ceases such as she becomes pure, he reaches his destination or he has recovered from his illness, then there are two opinions as to whether the person should restrain himself or not.

“Whoever eats at the beginning of day, then he should eat at the end of it.”

The reason is it is an absolute permissibility for him to break his fast at the beginning of the day. If he breaks his fast, then he should continue to do so until the end of the day. It is as though the excuse still exists.

Ibnu Qudamah said: If a person has intercourse after the excuse for him to break his fast ceases to exist, then there are two narrations for this situation:

Dr Muhammad Zuhaili said that if a travelling person breaks his fast then he returns home during daytime in Ramadhan, then it is sunnah for him to refrain himself until the time to break the fast. The purpose is to honour and respect the time of fasting. This is not wajib but it is restricted to eat or drink in front of others who do not know of his situation to avoid fitnah and accusation. (See al-Mu’tamad fi al-Fiqh al-Syafi’e, 2/197)

Whoever intentionally has intercourse during the day in Ramadhan and voluntarily, then his fast is invalid and he is fined with kaffarah kubra as stated in a hadith narrated by Abu Hurairah RA, where he said:

A man came to the Messenger of Allah (ﷺ) and said, “l am ruined O Messenger of Allah (ﷺ)!" The Messenger of Allah (ﷺ) asked him, “What has ruined you?" The man replied, ‘I had intercourse with my wife during the day in Ramadan while fasting)’ The Prophet said to him, "Are you able to free a slave?" The man said, ‘No.’ The Prophet said, "Can you fast for two consecutive months?" He said, ‘NO.' The Prophet then asked him, "Can you provide food for sixty poor people?" He said, ‘No.’ Then the man sat down. A basket of dates was brought to the Prophet and he said to the man, “Give this as Sadaqah (voluntary charity)” The man said, ‘To someone who is poorer than us!’ There is no one in this city (Al-Madinah) who is in need of these dates more than us!’ The Prophet laughed until his molar teeth could be seen and said to the man, “Go and feed your family with these dates.”

Dr Muhammad Zuhaili in his book stated that it is wajib for a husband to pay kaffarah. And the woman is not fined even if she is fasting. The reason is kaffarah is of a man’s specific right and not the woman the same as mahar. This is due to the fact that the act of intercourse is of the man, then the kaffarah is wajib on him. Hence, it is only wajib for the woman to qadha’ her fast. (See al-Mu’tamad fi al-Fiqh al-Syafi’e, 2/204)

Islam prohibits obeying other creations in matters involving transgressions and disobedience towards Allah SWT as stated in a hadith from Sayyidina Aki RA, where the Prophet PBUH said:

“There is no obedience in matters involving disobedience to Allah.”

Al-Khattabi commented on the hadith saying: “It is not wajib to obey something that is munkar and what is meant as makruf are matters which are considered as good according to syara’.” (See ‘Aun al-Ma’bud wa hasyiah ibnu al-Qaiyyum, 7/208)

According to the above question, it is permissible for the wife to refuse her husband for it is not wajib for her to obey her husband in matters of transgression. This is as narrated by Saidina Ali RA:

“There is no obedience in matters involving disobedience to Allah.”

If they had intercourse, then it is a prohibited act for the wife intentionally invalidate her fast. And leaving Ramadhan fast is haram according to syara’.

The same applies for the husband who encourages transgression, even if it is not wajib for the husband to fast and it is permissible for him to have intercourse due to the facilitation given to him, however, asking his wife to break her fast is haram.

“Indeed, whoever intentionally leaves Ramadhan fasting, then it is a worse act than committing fornication and drinking alcoholic beverages. Furthermore, their Islam is doubtful and they are possibly kafir zindik.” (See Fiqh al-Sunnah, 1/434)

Thus, the act of having intercourse is a great offense and it is haram according to syara’ of which it is wajib for them to repent and they should be determined to never do it again. However, the husband is not fined with kaffarah because he was not fasting because he was travelling.