IRSYAD AL-FATWA SERIES RAMADHAN EDITION 153: IS IT PERMISSIBLE FOR A CHILD UNDER THE CARE OF HIS FATHER TO PAY FOR HIS OWN ZAKAT FITRAH? 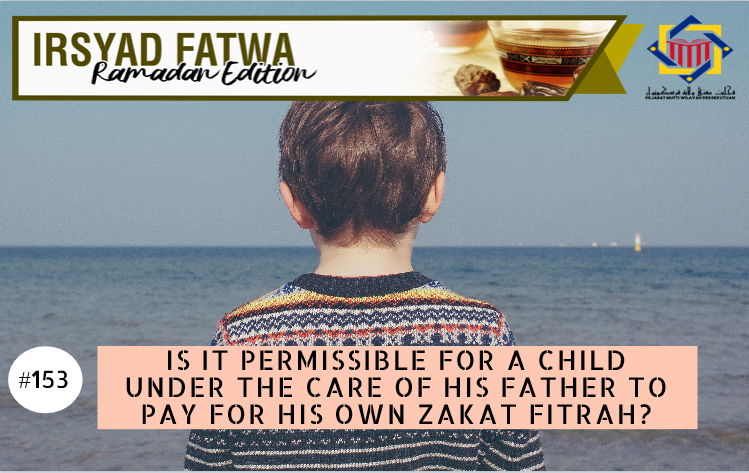 Assalamualaikum. Is it permissible for a child who is still under the care of his father to pay for his own zakat fitrah? And is it true that it is wajib for a father to pay the zakat fitrah for his children? Hope for an explanation.

We will begin with the definition of zakat fitrah which is certain amounts from one’s property that is wajib to be paid by every mukallaf for himself and his dependents after the sun sets on the last day of Ramadhan on certain conditions. (See al-Fiqh al-Manhaji, 1/553)

Among the roles and functions of zakat fitrah is stated in a hadith narrated from Ibn Abbas R.Anhuma, where he said:

Zakat fitrah is one of the obligatory worships that must be fulfilled by a Muslim himself or through his proxy. In a hadith narrated by Ibnu Umar RA, he said:

“Allah's Messenger (may peace be upon him) prescribed the payment of Zakat-ul-Fitr (on breaking the fast) of Ramadan for people, for every freeman, or slave, male and female among the Muslim – one sa' of dried dates, or one sa' of barley.”

There are three valid conditions for zakat fitrah:

Imam al-Nawawi said: “If a child does not own any property, then his zakat fitrah is paid by his father. It is wajib for the father to pay it according to the consensus of scholars as cited by Ibn al-Munzir and others. However, if the child has his own property, then the zakat fitrah is taken from his property. The same is stated in the opinions of Abu Hanifah, Ahmad Ishaq and Abu Thaur.” (See al-Majmu’ Syarh al-Muhazzab, 6/141)

Imam al-Nawawi also said: If a child is rich, then his zakat fitrah is taken from his property, not from his father or grandfather. This is the opinion of Abu Hanifah, Muhammad, Ahmad and Ishaq. (See al-Majmu’, 6/120)

“When a person is obligated to provide (sustenance/maintenance) for someone, then it is also his obligation to fulfil the zakat fitrah.”

Thus, if it is his obligation to provide for another person due to marriage (his wife, children), family ties (mother, father, sibling) and service (slave), then it is also wajib for him to pay the zakt fitrah of his dependents. (See al-Taqrirat al-Sadidah, pg. 419)

According to the above discussion and explanation, it can be concluded:

May Allah SWT grant us the knowledge and understanding in obeying His every commandment. Amin.