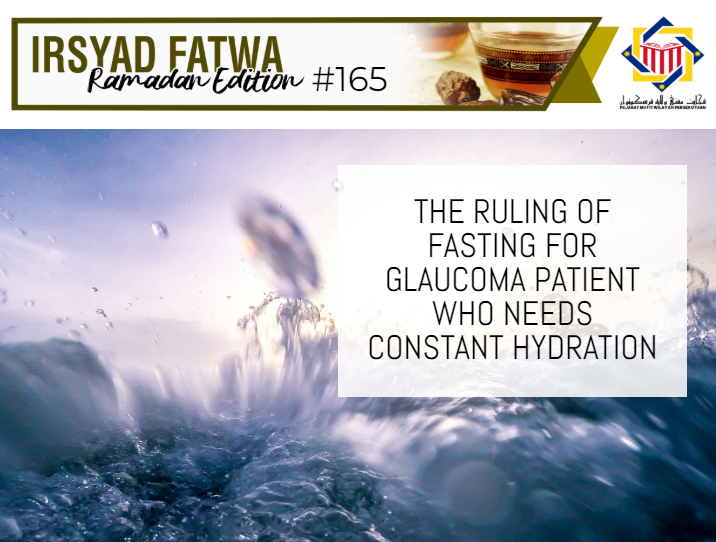 My mother is a glaucoma patient where one of her eyes is affected by the disease. So, she depends on medications to make sure her optic nerves continue to function. If the optic nerve deteriorates it can cause my mother to lose her sight and become blind. When my mother consumes medications, she needs to always drink a large quantity of water to make sure her kidneys will not be affected.

The problem is, in Ramadan, the doctor advises my mother to not fast. This is because, according to him, if my mother consumes the medications during suhoor and breaking fast, she would still need to drink water continuously for the whole day to make sure the medication will not have a negative effect to her kidneys.

The doctor explained there is a case where one of his patient fasts and at the same time consume the medication. However, they soon discovered that both his kidneys were damaged due to the insufficient water intake. At last, the patient dies due to kidney failure.

So, my question is, for my mother’s case, what is the ruling for her? Is she included under the category of a person not obligated to fast? My mother is healthy, but only one of her eyes has an issue.

We have answered on the characteristics of glaucoma disease in the article Irsyad al-Fatwa Series 376: Usage of Implants Made from Swine for the Treatment of Glaucoma. In short, “Glaucoma” is a disease caused by an increase of pressure inside the eye, which deteriorates one’s sight or could cause total loss of eyesight. Hence, glaucoma is a disease categorized as severe and leads to darurat (exigent) situation as it has the possibility to depreciate organ function which is the eye. In madhhab al-Shafi’e, the exigent situation is named as masyaqqah or difficulty which is normally unbearable and permits tayammum.

“Our ashab (the scholars of madhhab al-Shafi’e) said that the condition which permits breaking fast is when the outcome of fasting is unbearable difficulty as discussed in the chapter of tayammum.”

“Pertaining to the ruling of tayammum, al-Shafi’e rahimahullah permits it due to simple excuse in some circumstances while prohibits it under heavier excuses. To him, excuses have their own levels of intensity. The first level is the most intense in difficulty which could even cause harm like the risk of losing one’s life, physical organs, or organ function. So, it is permissible to do tayammum when the excuse occurs…”

Hence, it is clear to us that illnesses that existed due to or come together with fasting, which may cause organ failure is one of the hindrances towards the obligation to fast in the month of Ramadan. One who is afraid that if he fasts, his organ would be affected and become dysfunctional, or worse, causes death, is not obligated to fast.

A question arises. If a person is not obligated to fast due to sickness, is he accountable (dzimmah) to replace the fast when he recovers, or is he only accountable to pay fidyah?

The answer is the accountability depends on the nature of his sickness. We can divide it into two categories:

Sickness with the possibility to recover

The patient is permitted to break his fast, but as he has the possibility to recover, then it is wajib for him to replace his fast when he is capable to do so. This is in accordance with the saying of Allah SWT:

So whoever among you is ill or on a journey [during them] - then an equal number of days [are to be made up].

“[and it is wajib to replace the missed fast although it is left due to permissible excuses] like sickness and travel according to the above verse because the meaning is [So, break your fast and replace it according to the number of days left in other days] and the same for women in haid (mentruation) and the like.”

Sickness with no possibility to recover

Illnesses under this category are included under the category of people who are unable to fast like the elderly. The ruling is they are not obligated to fast and it is also not wajib to replace it, but he is obligated to pay fidyah for number of days he missed in the month of Ramadan.

This is in accordance with the saying of Allah SWT:

“For those who are incapable to fast, it is wajib for him to pay fidyah which is to provide food for the poor, one mudd for each day from food, which is approximately 600 grams of the local staple food. If he forces himself to fast, then there will be no fidyah for him. The evidence for fidyah is the saying of Allah SWT:

And upon those who are unable to fast (due to old age and etc.)- a ransom [as substitute] of feeding a poor person [each day]

In which they are obligated to fast, but they are unable. Ibn Abbas R.Anhuma said: “Those are men and women of really old age, who are unable to fast, then they should feed the poor for each day.” Narrated by al-Bukhari (4235)

It is narrated by Abu Hurairah RA that he said: “Whoever reaches really old age, then he is unable to fast in Ramadan, then it is wajib for each day (missed days) of one mudd from wheat flour.” Narrated by al-Baihaqi (4/271)

Ibn Umar R.Anhuma said: “If one is too weak to fast, then he should feed for each day one mudd.”. Narrated by al-Baihaqi (4/230)

Maybe a question arises; how about the ruling of patients who are unable to fast due to sickness, but is unsure whether his sickness is:

Firstly, the level of severity of his sickness which permits breaking fast should be according to the prognosis of a Muslim doctor who is adil (fair) and trustworthy. Refer Hasyiah al-Syabramallisi (3/185); dan Hasyiah al-Jamal (2/332).

Secondly, if the sickness is predicted to be impossible to be cured, but then it is cured. So, there are three opinions of the scholars:

First opinion: It is not wajib to replace because he is already obligated with fidyah. This is the final opinion in madhhab al-Shafi’e.

“Indeed, the patient is not obligated to replace it, if he then becomes able to fast; because the obligation of fasting was lifted from him already, when he was not obligated to it, like the asah opinion (stronger opinion among scholars in madhhab al-Shafi’e) in al-Majmu’, because he was formerly only obligated with fidyah and not to replace his fast.”

Sheikh Ali Syabramallisi commented on the above statement: “Even if the fidyah is still unsettled.”

“And if he suddenly becomes able after that to fast, then he is not obligated to replace them as mentioned by the majority of the scholars.”

Second opinion: It is wajib for him to replace his fast, like the sick who have hope of recovery. This is a wajh among the Shafi’eyyah. Refer al-Majmu` Syarh al-Muhadzzab (6/259)

Third opinion: It is wajib for him to replace it if he recovers before he pays fidyah and it is not wajib if he recovers after he paid fidyah. This is the opinion of Imam al-Baghawi in madhhab al-Shafi’e. Refer Ibid.

Adat (Nature/Habit) as the Source of Ruling

If the doctor tells that normally, people who consume certain medications, then he fasts then he will die, then the ruling of fasting after consuming the medication is haram.

And do not kill yourselves [or one another]. Indeed, Allah is to you ever Merciful.

and do not throw [yourselves] with your [own] hands into destruction [by refraining]. And do good; indeed, Allah loves the doers of good

“Custom (something which repeats timelessly) is arbitrary”

For example, a woman experiences istihadhah is wajib to take her last cycle of his menstruation as her benchmark if she is unable to differentiate the characteristics of her blood.

Based on the above facts and explanation, we are inclined to state as the following:

May this explanation provide an answer to the questioner. Let’s make du’a for Allah SWT to accept all our good deeds with a solemn heart with all our capabilities. Ameen.