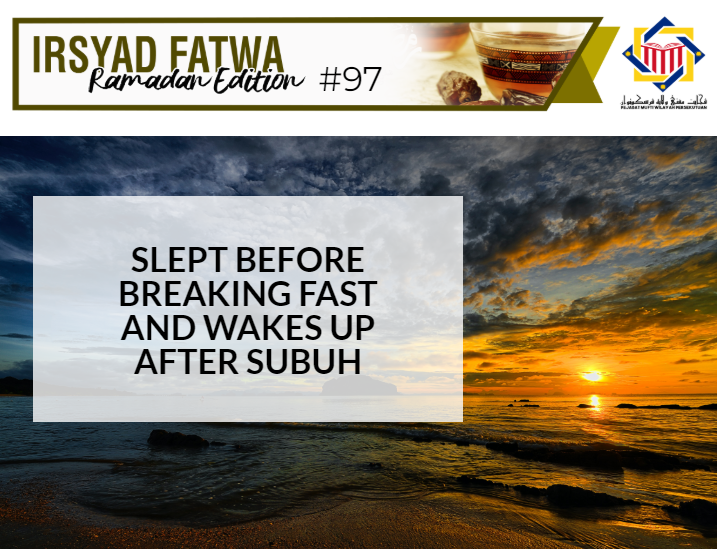 Due to the short duration of time between the Maghrib and Subuh time in my region, I want to ask if I fell asleep before breaking my fast and wakes up at 3 in the morning but the time for Subuh prayer has started what is the status of my fast the following day? Since I haven’t broke my fast for the previous day. Hope for an explanation.

We will start the answer to this question by explaining that one of the valid conditions of fasting is setting the intention. Jurists stated that conditions considered for a certain intention are based on the following three matters:

Niyyah (intention) should be done with certainty and conviction to avoid any doubt about the intention. For example, if a person sets his intention on the night intending to fast for the next day if it happens to be Ramadhan the next day, then this intention is null and void.

This means the intention should be determined; whether the fast is for Ramadhan, nazar, qadha’, or others. It is not sufficient with just an absolute intention to fast without specifying what type of fasting he intends to perform.

Tbayit means it happens during the night, during the period after the sun sets and before the sun rises. This is the condition according to Malikiyyah, al-Syafi’iyyah and al-Hanabilah jurists. This is in accordance with a hadith from Hafsah binti Umar R.Anha where the Prophet PBUH said:

"Whoever does not have the intention of fasting from the night before, then there is no fast for him."

According to the above hadith, the negation stated by the Prophet PBUH is categorized as nafsyu al-sihhah (negating the validity) according to the jurists. Thus, it means that whoever did not set his intention to fast during the night, then his fast the following day is invalid. Likewise, is the opinion of scholars when commenting on the word siyam (fast) which is stated in the hadith in the nakirah form following the maxim:

Nakirah which comes in the context of a negation brings a general meaning.

Thus, this is a general hadith which includes both the obligatory and sunnah fasting. Thus, some scholars state that it is also wajib to set the intention during the night (tabyiit) for sunnah fasting referring to the generality of the term fast in the above hadith.

First: Wajib to set the intention on the night a person intends to fast

This is the opinion of the majority of jurists and the tabyiit must be done on each night. The argument for this opinion is the above-stated hadith from Ummul Mu’minin Hafsah. Likewise, the worship of fasting is mustaqillah (alone) and thus it is wajib to set the intention on the night of each day of fasting.

Second: It is permissible to set the intention for the whole month of fasting

After stating the above arguments and syara’ evidences as well as the opinions of scholars, we would like to state that for a person who fell asleep before breaking his fast and he wakes up after the sun has risen, then his fast is invalid according to the majority of scholars. Furthermore, it is wajib for him to replace (qadha’) it on another day. This is in accordance with an Islamic legal maxim which states:

Avoiding the khilaf (difference of opinions by scholars) is an encouraged act.

However, in this case, considering that the time for breaking fast is very limited, in our opinion if the questioner has set his intention to fast for the whole month following the opinion of madhhab Maliki, then we are inclined towards the fast being valid celebrating the situation where the time is very limited at the place the questioner is. Hopefully, this explanation gives a clear answer to the questioner as well as all of us. Amin.