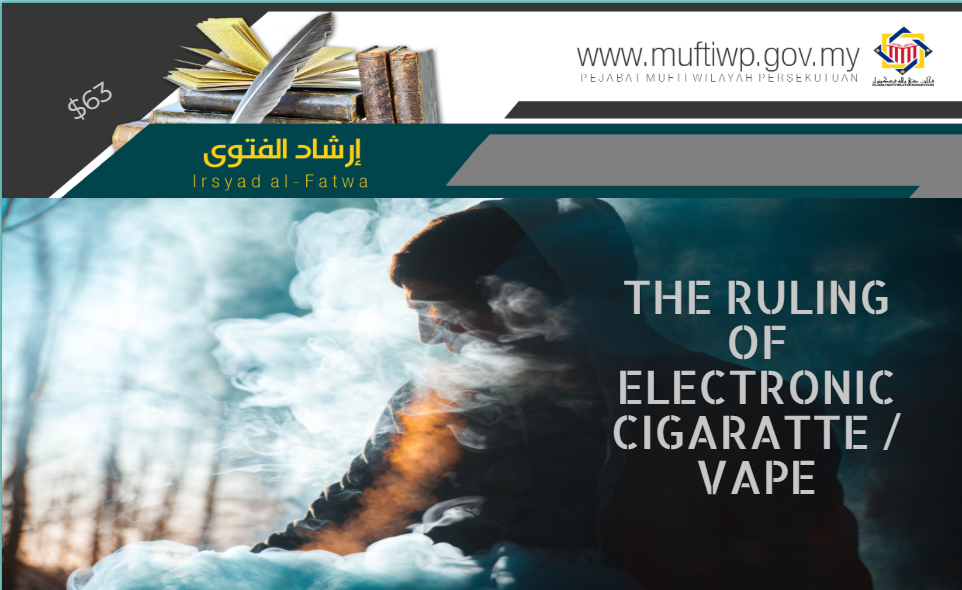 What is the ruling of smoking electronic cigarette/vape?

In this series of Irsyad al-Fatwa, we try our best researching on this issue, due to the vast usage of it in our society, where even teenage girls are involved in this. The most common reason for people getting involved in smoking electronic cigarettes or vape is to use it as a substitute for cigarettes with the intention of gradually stopping themselves from smoking or also known in Arabic as tadarruj. This judgement makes it seems like smoking vapor is acceptable. Hence, this series of Irsyad al-Fatwa intends to explain in detail of the issue and its ruling.

On 21st December of 2015, Muzakarah of the Fatwa Committee of National Council for Islamic Affairs decided that smoking e-cigarette or vapor is prohibited (haram).

Electronic Cigarette (Electronic Nicotine Delivery Systems or e-Cigarette) is an innovation of the conventional cigarette to a modern version. Now, it is also known as vape or vapor. The word ‘vape’ is originated as an abbreviation of the word ‘vaporization’ which means the evaporation process. It is also referred to as ‘vaporizer’, a tool used to inhale drugs, tobacco and other smoking mixtures. Oxford dictionary added this word as a new word in August 2014. [1] The verb means ‘to inhale and exhale the vapour produced by an electronic cigarette or any similar device’. The word ‘vape’ also refers to an electronic cigarette or a similar device. [2]

Hereby, we state the opinions of experts regarding the usage of electronic cigarette:

The Evidence of Prohibition of Harmful Substances

“And do not throw [yourselves] with your [own] hands into destruction [by refraining]. And do good; indeed, Allah loves the doers of good.”

Even though this verse reveals on the maintenance for infāq fī sabīlillāh, but the generality of it encompasses all sorts of actions which lead to harm, as explained by al-Shawkani:

“Truly, the consideration is taken from the generality of the word, not specifically due to the reasons for revelation. Hence, every means of harm either towards religion or worldly matters, then they are included in this verse generally. And this is also what is believed by Ibn Jarir al-Tabari.”

Second: The saying of Allah SWT in the Quran:

“And do not kill yourselves [or one another]. Indeed, Allah is to you ever Merciful.”

According to al-Jassas, this verse comprises the prohibition of killing either towards others or one’s self. Refer to Ahkam al-Quran (3/127)

“There should be neither harming nor reciprocating harm.”

This hadith also shows the prohibition of harming generally that the expression of this hadith is made into an Islamic legal maxim.

“And whoever drinks poison and kills himself with it, he will be carrying his poison in his hand and drinking it in the (Hell) Fire wherein he will abide eternally forever.”

This hadith warns people with the Hellfire and its terrific torment for those who commit acts that are harmful for themselves. Generally, the evidence prohibits all form of harm towards one’s self.

There are scholarly fatwas that support the prohibition of this electronic cigarette. Hence, we agree with the prohibition ruling considering the reasons presented above. Regarding the review towards the prohibition, kindly refer to Bayan Linnas Series 18 [14]

Scholarly Fatwas and the Opinions of the Islamic Scholars

We state here that the fatwa issued for its ruling is the same as the ruling of conventional cigarette. Hence, its ruling is HARAM. [15]

The Usage of Vape in the Perspective of Maslahah Ammah

The authorities should also amend its prohibition to vape if there is maslahah ammah. This is because it is one of the obligations of a ruler stated in a maxim:

Al-Syarwani; a Shafi’ite scholar upon emphasizing on the prohibition of smoking due to maslahah ammah said, “If a ruler commands the people to not smoke which is known today, then it is wajib for them (the people) to obey. Before, Deputy Prime Minister once commanded in Egypt to not smoke at the roads and cafes, but many defy this command. Hence, they are among the sinners”. Refer Hashiah al-Syarwani (3/69)

Stating something as maslahah ammah in some issues pertaining the rulings is an obligation of the scholars and mujtahid, as explained by Abdussalam al-‘Abbad when speaking of the maslahah ammah, “Asserting the existence of these conditions in every maslahah issue is the duty of the mujtahidin who are eligible to do ijtihad and fulfilled the conditions set”. Refer Nas al-Milkiyyah al-Khassah li al-Manfa’ah al-‘Ammah (2/995)

In this issue, it is undeniable that many people suggest that it is one of the ways to help heavy smokers to stop smoking. Hence, they use this electronic cigarette as an alternative to stopping. However, this assumption contradicts the facts because it is said that there are still nicotine substances which are the cause of addiction and harm towards people’s health. Our stand in this is the same as our opinion in the issue of smoking and we would like to advise all Muslims to stop smoking electronic cigarette or vape based on the above statements. How good it is if the money we use to buy this e-cigarette or vape is instead used to donate to the mosque’s donation box, or be used to cherish the orphans, or be given to the poor and needy as well as helping to provide for their needs. May Allah give us taufiq and hidayah as well as good health. Ameen.