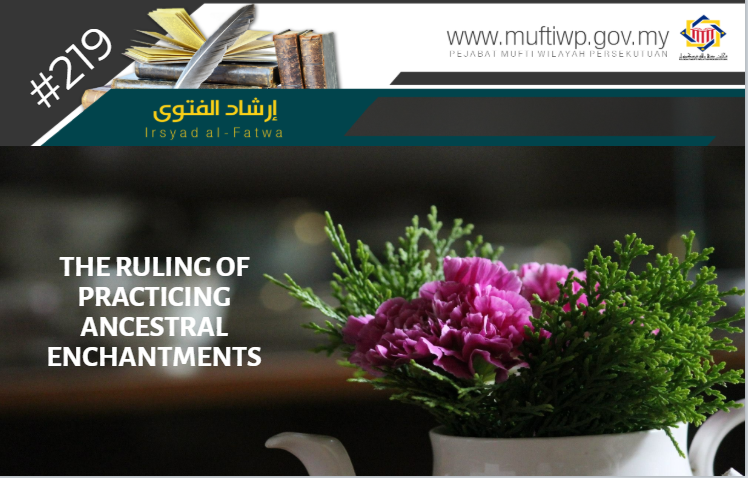 Assalamualaikum ustaz. I want to ask, should I follow the practices of my ancestors? This is due to the fact that my mother and sisters still practised this. The practise I mean here is words in our ethnic language and enchantments that is inherited. I hope to get a clarification regarding this matter.

Generally, Islam does not prohibit any knowledge or practises, if it does not contradict with the teachings and principles of syara’ and it does not transgress what has been set in Islam. However, if it contradicts the Islamic teachings, then, we are prohibited from following or practising it.

And when it is said to them, "Come to what Allah has revealed and to the Messenger," they say, "Sufficient for us is that upon which we found our fathers." Even though their fathers knew nothing, nor were they guided?

Sayyid Qutb when commenting on this verse said: “Islam came bringing the concept of tauhid, to worship the one and only god which is Allah SWT and to liberate mankind from ubudiyyah (slavery), towards fellow humans or from the belief of many gods. Islam came to free mankind from false beliefs and return the honor and magnificence of humans’ intellect. Due to this, Islam removes all forms of paganism, whether it is in the form of belief (in the hearts) or any type of worship or rules, systems or way of life.” (See: Tafsir fi Zilal al-Quran, 4/530)

Obedience is only in terms of good deeds, as has been stated by the Prophet PBUH:

"No obedience for evil deeds, obedience is required only in what is good."

In another narration, the Prophet PBH said:

Thus, it is understood that obedience to other people is on the condition of that it is only for good deeds and when it does not contradict the commandments of Allah SWT. If there is a contradiction, then one must refer back to the Quran and Sunnah of the Prophet PBUH.

Among the knowledge or practises that some of our society inherit from their ancestors are enchantments or certain words that when spoken, are believed to have supernatural effects, such as healing powers and others. (See: 4th edition Kamus Dewan)

In Arabic, it is known as al-ruqyah (الرقية). Ruqyah according to Ibnu Manzur in Lisan al-Arab (14/331) is العوذة , which is protecting oneself. Enchantments are divided into two:

Here, we state a few rulings regarding enchantments in Islam:

The ruling of prohibition is for all types of enchantments that contains shirk, such as worshipping jinn, shaytan or the phrases used from a language that is not understood, or not from al-Quran or al-Hadith.

This is in accordance with a hadith by Ibn Mas’ud R.Anhuma, the Prophet PBUH said:

Imam al-Syaukani said: “These three things, which are enchantments, amulets and tilawah is prohibited because of the belief that these things could affect something, and not Allah SWT.” (See: Nail al-Authar by al-Syaukani, 9/85).

Syeikh Dr Yusuf al-Qaradhawi said: “The prohibition of enchantments by scholars are words that are not in Arabic, and that the meanings are unknown. This is due to the fact that the words may contain sorcery or disbelief. However, if the words’ meanings are known and are of the words of Allah SWT as well as the remembrance of Him, then it is permissible.” (See: al-Halal wa al-Haram fi al-Islam, pg. 459-450)

Thus, it is clear that the prohibition of enchantments is when it contains worship towards jinn and shaytan. The same goes for phrases where their meanings are not understood, for they may contain elements of sorcery or disbelief.

It is permissible for enchantments that are taken from al-Quran, al-Hadith and phrases where the meanings are understood and do not contain shirk. This is in accordance with a hadith from Auf bin Malik RA. However, even when the Prophet PBUH permits it, the Prophet PBUH set a strict rule, which is ( مَا لَمْ يَكُنْ فِيهِ شِرْكٌ) – as long as there is no shirk in it.

“In the pre-Islamic period we used to apply spells and we asked: Messenger of Allah! How do you look upon it? He replied: Submit your spells to me. There is no harm in spells so long as they involve no polytheism.”

Imam al-Baghawi in his book Syarh al-Sunnah states, even though it is permissible, however, it is on the condition that there are no elements of shirk in it. However, if it uses Al-Quran and zikr (remembrance of Allah SWT), the ruling is permissible, and it is encouraged. (See: Syarh Sunnah, 12/159)

“I do not see any harm (in it), so he who amongst you is competent to do good to his brother should do that.”

Imam Ibn Hajar al-Asqalani said that Islamic scholars have agreed that enchantments or ruqyah is permissible if it fulfils the following three conditions:

If any one of the conditions is not fulfilled, then the enchantment is impermissible.

As a conclusion, we hold the opinion that the enchantments should be analysed in terms of its wording and phrases. If they are not from the Quran or al-Sunnah and contain elements of shirk towards Allah SWT, then it is totally prohibited. The same goes if the words used are unclear and cannot be understood, for it is feared that there may be elements of sorcery or disbelief.

However, using al-ruqyah al-syar’iyyah or enchantments that are permissible according to syara’, using the verses from the Quran or certain prayers is permissible when there are no elements of shirk and disbelief. Furthermore, it must be clean from any elements that worship or a form of prayer to jinn, shaytan or practises that contradicts syara’.

Here, we include the guidelines issued by Department of Islamic Development Malaysia (JAKIM) entitled “Guidelines of Spells and Enchantments in Islam” which states:

Lastly, let us pray to Allah SWT to give us guidance and understanding in our religious obligations, so that it will enable us to follow the right path in His religion.