IRSYAD FATWA SERIES 231: THE RULING OF RENOUNCING THE FRIDAY PRAYER FOR IT COINCIDES WITH CLASSES 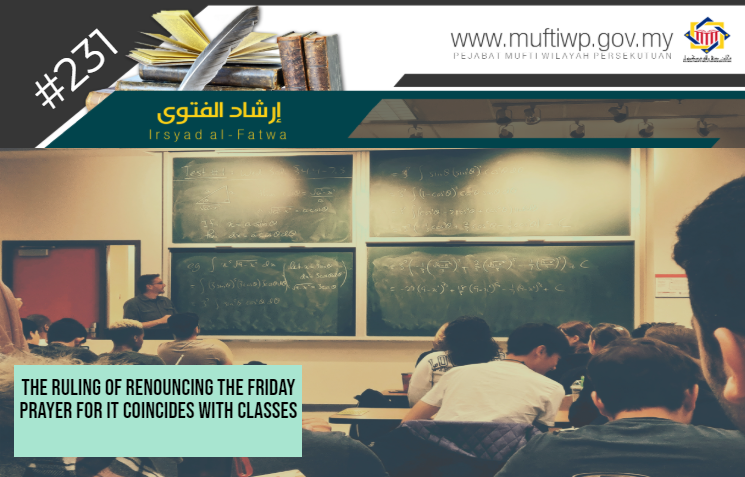 Friday prayer is an obligatory worship that is commanded in Islam.

“O you who have believed, when [the adhan] is called for the prayer on the day of Jumu'ah [Friday], then proceed to the remembrance of Allah,”

However, under certain circumstances, there is a rukhsah (facilitation) to not perform the Friday prayer. Ibnu Abbas R.Anhuma narrated, that the Prophet PBUH said:

“If anyone hears him who makes the call to prayer and is not prevented from joining the congregation by any excuse--he was asked what an excuse consisted of and replied that it was fear or illness--the prayer he offers will not be accepted from him.”

Syeikh Muhammad al-Zuhaili said: “And the excuse includes any distress that is the same as the distress due to illness, it is also considered as an excuse that is concluded through qias from the hadith above. Hence, it is not obligatory for someone to perform the Friday prayer if he fears for his safety or the safety of his property.” Refer: Al-Mu’tamad fi al-Fiqh al-Syafie (1/497)

The exception is also given to travellers, this is in accordance with the Prophet PBUH’s actions of not performing the Friday prayer when the Prophet PBUH is travelling for Hajj, where the day of Arafah falls on a Friday, thus, the Prophet PBUH performed jamak for Zuhur and Asar prayer.

Is it Obligatory for Students Who Stay Abroad and Are Not Residents to Perform the Friday Prayer?

In this case, what needs to be determined is whether it is obligatory for students that stays abroad for a long time but not a resident to perform the Friday prayer?

According to mazhab Syafi’e, it is still obligatory to perform the Friday prayer for a traveller who stays at a place for 4 days or more with the intention of returning back to his place of origin even if the duration is long. (Refer: Syeikh Hasan bin Ahmad al-Kaf, At-Taqrirat As-Sadidah, pg. 324 and Al-Mu’tamad fi al-Fiqh al-Syafie 1/496)

The second opinion states that it is not obligatory to perform Friday prayers for travellers that has no intention to be a resident, it is only obligatory for those who are a resident and they possess citizenship. (Refer: Al-Mughni, 2/252 and Al-Kafi fil Fiqh al-Imam Ahmad, 1/321)

Thus, in this case, there is a facilitation in mazhab Hanbali to not perform the Friday prayer, for those who are travelling and staying for a long time at a place but are not a resident. However, this facilitation is only applicable in desperate situations.

“Whoever neglects the Friday prayer three times (in a row) without an excuse, then Allah sets a seal upon his heart.”

“So, fear Allah as much as you are able,”

As a conclusion, we emphasize that the original ruling of performing the Friday prayer even if it coincides with classes is still obligatory. Whoever is in this position should consult with their faculty or lecturer to switch time for the class or change his schedule so that it will not coincide with Friday prayer.

If there is no other choice, then it is permitted to choose to take one opinion from mazhab Hanbali that states that it is not obligatory for students who stay abroad to perform the Friday prayer. This is only when he fears that by not attending his classes that coincides with Friday prayer, he will not be allowed to take the exam, or forced to repeat the semester that would lead to financial implications and others.