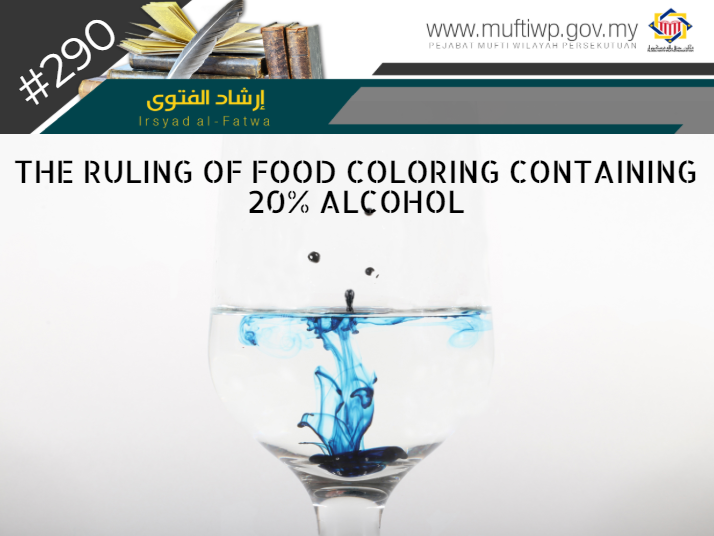 I have a question regarding food colouring. As an example, there is a brand of food colouring that contains 20% ethanol. Is it prohibited?

The original ruling for ethanol in food is it is an intoxicating chemical. Whatever ingredient that is intoxicating in food is prohibited to be eaten. Ethanol is a scientific name for alcohol. According to the 4th edition of Kamus Dewan, alcohol is a flammable and intoxicating chemical in liquid form. The evidence for its prohibition came from a hadith from Ummul Mukminin, Saiyidatina Aisyah R.Anha, where the Prophet PBUH said:

"All drinks that produce intoxication are Haram (prohibited to drink).”

"If a large quantity of any beverage intoxicates, then a small amount of it is prohibited."

However, not all food that contains alcohol is considered as intoxicants. There are some food or drinks that when eaten according to the custom is not intoxicating. It is also not considered as najis (impure things according to syarak), for the main purpose of the production of the food is not to produce alcohol, but it is just the by-product of the process. We include the Brunei State Government Fatwa in 2005 (pp. 74-75) which states:

"This means that the impurity (najis) status of alcohol depends on one imperative characteristic of alcohol, which is, it is an intoxicant. It is understood that just because it is alcohol, it is not automatically assumed to be an intoxicant, if it is not taken (extracted) from alcohol, or other intoxicating beverages, for example, tapai (a dessert) is not prohibited, even though according to experts it contains alcohol, for it is not intoxicating."

Hence, although the duty of identifying halal food and beverages is the responsibility of the Muslim community. Development and progress in the food and beverages cause the identification of the ingredients used in them to be complex and require the help of public institutions. Therefore, we refer to the Department of Islamic Development Malaysia (JAKIM; Halal Hub Division), as the responsible body for carrying out halal certification in Malaysia with the state Islamic Religious Department. [2]

According to the facts and discussion above, we are inclined towards stating that food colouring that contains 20% alcohol is prohibited, for it exceeds the 0.5% set by syarak, even if the alcohol in the food colouring is not produced through the process of making liquor as has been decided by Muzakarah of Fatwa Committee of the National Council for Islamic Religious Affairs Malaysia. It is best that the questioner to ask straight to JAKIM Halal Hub Division for an explanation.

Hopefully, this explanation can give an answer to the questioner.