IRSYAD AL-FATWA SERIES 312: WARNING AGAINST THOSE WHO SEVER FAMILY TIES 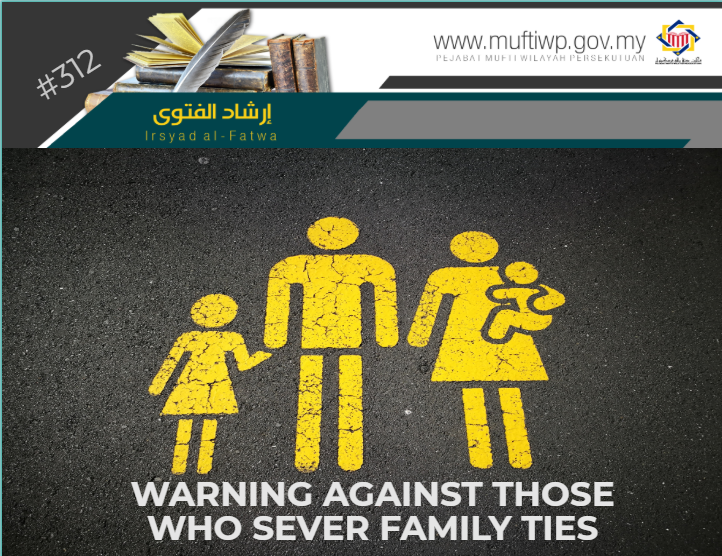 What is the ruling for severing family ties with someone and no longer consider the person as family?

The word silaturrahim originates from two Arabic words which are “صلة” which means relation and “الرحم” which means close family. It means protecting and maintaining a close family relationship.

The meaning of Rahim when it is referred in silaturrahim is:

Severing family ties is among the major sins according to the consensus of scholars. Severing family ties between close family members would hurt their feelings either by neglecting them such as excluding them in helping them through monetary means when they are in need while we are able to or did not visit them when they are sick or ill without any valid reasons. Valid reasons meant here is if he loses something that could strengthen their relationship such as lost of property or they have some property but it is only sufficient for his own needs.

“Maintaining silaturrahim means doing good to family members because of the relationship you have with them; it may be done through the means of property, sometimes through service to them, sometimes through us visiting them, giving and answering salam and others.” (See Syarh al-Nawawi ‘ala Sahih Muslim, 2/201)

“O mankind, fear your Lord, who created you from one soul and created from it its mate and dispersed from both of them many men and women. And fear Allah, through whom you ask one another, and the wombs. Indeed, Allah is ever, over you, an Observer.”

“So, would you perhaps, if you turned away, cause corruption on earth and sever your [ties of] relationship? Those [who do so] are the ones that Allah has cursed, so He deafened them and blinded their vision.”

The above verse explains to us that we should fear Allah SWT and never sever our silaturrahim.

According to the above verse, Imam al-Qurtubi Rahimahullahu Taala commented on the words أَرْحَامَكُمْ: “The word Rahim has a general and specific meaning. It is generally meant as family members according to the religion. They are your brothers who have the same faith as you do, although they are not your family member. Then it is obligatory for you to maintain your silaturrahim according to the faith through love and care, helping each other, advising, not harming others, being fair, protecting each other’s rights such as when he dies one should bath him, pray for him, bury him and fulfil their rights when they are ill for us to visit them. As for Rahim’s specific meaning is paternal and maternal close family members. Thus, it is obligatory to fulfil their specific rights, such as providing appropriate nafkah (sustenance) for them and not to forget our promises when they need them.” (See al-Jami’ Li Ahkam Al-Quran, 8/164)

“…and he who believes in Allah and the Last Day, let him maintain good the ties of blood relationship,”

"Whoever loves that he be granted more wealth and that his lease of life be prolonged then he should keep good relations with his Kith and kin."

It is narrated from Jubair bin Muth’im R.Anhu, that the Prophet PBUH said:

There are various approaches to maintain silaturrahim. Among them are:

Among the situations where it is permissible to not visit one’s close relative is when he hears that his relatives has denounced Islam (riddah/murtad) such as insulting Allah SWT, the prophets, angels or mocking the Quran and others, then it is no longer necessary for him to maintain his silaturrahim with the relative.

It is permissible to sever silaturahim with close relatives who are a fasiq who drinks alcoholic beverages, neglects prayer, commits adultery and others. It should be reminded that it is only permissible to sever the silaturrahim after we advise him and tell him why we are severing our ties with him, in order to motivate him to leave his transgressions.

“But those who break the covenant of Allah after contracting it and sever that which Allah has ordered to be joined and spread corruption on earth - for them is the curse, and they will have the worst home.”

Ibnu Abi Jamrah Rahimahullahu Taala said in his book Bahjah An-Nufus volume 4 pg 146: “Silaturrahim could be maintained through one’s wealth, helping them when they are in need, helping them against harm, be good to them and supplicating for them. All of these are for relatives who are consistent in goodness. However, if they are from among the disbelievers and who commit evil acts, then severing silaturrahim with them with the intention of doing it for the sake of Allah SWT and try to advise them (according to one’s capabilities) and telling them if they continue with their evil deeds then it will be the reason why you sever your silaturrahim with them. Then, this action is the real silaturrahim with them.” (See Fathul Bari Syarah Sohih Al-Bukhari, 13/521)

However, it should be reminded that our relationship with them (those who are disbelievers and commit evil deeds) still continues although we have severed our ties with them, through our continuous supplications to Allah SWT so that they will be guided and change and return to Allah SWT.

“O people, extend greetings (saying Salam to each other), keep relations with your kin, provide food (to people) and pray at night when people are asleep and you will enter Paradise in peace.”

The above hadith explains to us the four things we should do:

First: Spread salam by offering salam to others, whether you know them or not.

Second: Provide food and drink especially to those who are in need.

Four: Pray to Allah SWT during the night when others are asleep and remember Allah SWT.

Severing silaturrahim is among the reasons why the punishments for a person is hastened in this world even before the Day of Judgement. The Prophet PBUH said:

“There is no sin more fitted to have punishment meted out by Allah to its perpetrator in advance in this world along with what He stores up for him in the next world than oppression and severing ties of relationship.”

“Whoever wishes for a long life, abundant of wealth and avoid harm (disaster/calamity), then he should have taqwa to Allah and maintain his silaturrahim.”

Thus, according to the above evidences presented, maintaining silaturrahim is a commandment in Islam. May we all be among those who maintain and protect their silaturrahim. Amin.