IRSYAD AL-FATWA SERIES 326: THE STATUS OF BLOOD DISCHARGE DURING MISCARRIAGE 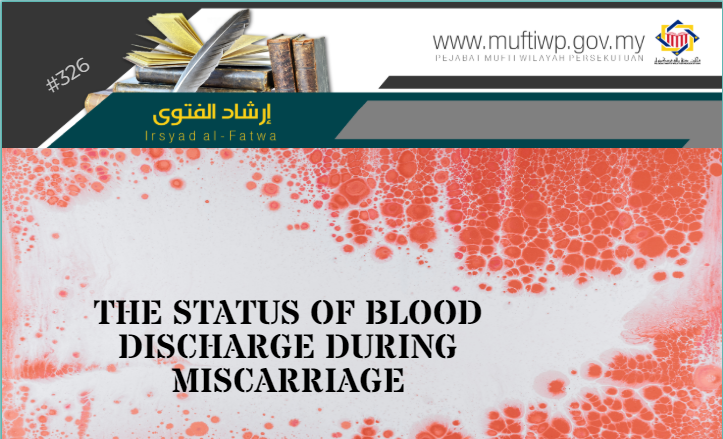 Datuk Dr. Hj Zulkifli, I would like to ask. The doctor has confirmed that my wife pregnancy is over (miscarriage) when there is no heartbeat detected on the 9th week. The doctor told her that in two weeks’ time, she will experience some bleeding of blood clots. This week, blood discharges bit by bit. The question is, is the blood considered as nifas or istihadhah and how should she go about her prayer?

Blood discharges from the vagina of a pregnant woman may be haid, istihadhah, wiladah and nifas. Hereby, we list out the situations for those cases:

The writers of al-Fiqh al-Manhaji define haid as follow: “The definition of haid in literal context is a flow. While, in term of syarak, it is a natural blood which is normal, discharges from the vagina of women who has reached puberty (baligh) in healthy state in certain times.” Refer: al-Fiqh al-Manhaji (1/77)

Certain times here means blood discharges from the womb in the period of 15 days of normal menstrual cycle, which is not the time of pure, and is considered as haid. This also includes blood which does not flow continuously, with the condition that it discharges for a day and a night, or 24 hours. This is because, the longest time of menses is 15 days. Refer: Sabila al-Muhtadin (1/139).

“And pertaining to the blood of a pregnant woman which she observes (discharges from her vagina), there are two opinions; the first one which is also more sahih (stronger opinion) in which the blood is haid. The second one, it is istihadhah, and this is the chosen opinion of al-Jurjani and other scholars. God knows best.”

This is different to Madhab Hanafi as stated by Syeikh al-Imrani in al-Bayan fi Mazhab Imam al-Syafie (1/348):

“Pertaining to the blood which the pregnant woman sees, there are two qaul upon this; first is it is not considered as haid, but rather corrupt blood and this is the opinion of Abu Hanifah, because women in menses do not get pregnant, also not under the ruling of a young girl. This is because, if she is having her menses, then talak will be haram upon her, and surely iddah will be completed after three times of pure. The second opinion is it is haid and this is a sahih opinion.”

Hence, if the blood discharges on the normal menstrual cycle period, which is not the time she is pure, then it is haid even if she is pregnant.

Pertaining to istihadhah, it is bleeding not according to the definition of haid, wiladah or nifas. Narrated by Fatimah binti Abu Hubaish R.Anha, she experienced istihadhah bleeding, then the Prophet PBUH said:

“When the blood of the menses comes, it is black blood which can be recognized; so when that comes, refrain from prayer; but when a different type of blood comes, perform ablution and pray, for it is (due only to) a vein.”

Hence, if the said blood discharges on the pure state, then the blood is istihadhah. The same goes for blood which discharges less than one day and night, then it is corrupt blood and not haid or nifas.

Originally, wiladah is not a type of blood, but rather it refers to the birth of the baby itself as the reason which obligates bath. The writers of al-Fiqh al-Manhaji (1/82) said:

However, there are differences of opinion among the scholars regarding the ruling of the miscarried fetus; whether it is obligatory to bathe the fetus in the form of ‘alaqah (blood clot) and mudghah (lump of flesh) after it is confirmed as such (as the fetus)? It is generally known that the development of fetus in the womb are in stages. Allah SWT state:

“Then We made the sperm-drop into a clinging clot, and We made the clot into a lump [of flesh], and We made [from] the lump, bones, and We covered the bones with flesh; then We developed him into another creation. So blessed is Allah, the best of creators.”

“Verily your creation is on this wise. The constituents of one of you are collected for forty days in his mother's womb in the form of blood, after which it becomes a clot of blood in another period of forty days. Then it becomes a lump of flesh and forty days later Allah sends His angel to it with instructions.”

Imam al-Nawawi said in al-Majmu’ (2/150): “And if a woman miscarried in the form of blood clot, or lump of flesh, then the obligation of bath is divided into two opinions (opinions among the ashab); the sahih one is it is wajib.”

“In the ruling of nifas, whether the baby is born in a complete form, or not, delivered as a stillborn, or miscarried in the form of lump of flesh or clot of blood, and when the midwife says: ‘Verily, this is the beginning of the form of humans’, then bleeding afterwards is nifas.”

Hence, if a midwife or a specialist doctor said that the blood clot is the fetus, or part of it, then blood discharges afterwards is considered as nifas.

Nifas (lochia/post-partum bleeding) is the blood discharged after giving birth. The minimum period of nifas is in the blink of the eyes (لحظة). Sometimes, it continues to several days and normally, the bleeding is up to 40 days. While the maximum period is 60 days. According to Imam al-Syafie’s research, blood discharges more than these durations is named as post-partum hemorrhaging (may be due to infection or other medical complication). Refer: al-Fiqh al-Manhaji (1/82)

Hence, in line with the above statement on wiladah, bleeding after giving birth, either because of miscarriage or normal, then it is considered as nifas, under the confirmation of the medical experts.

Based on the above facts and explanation, it is now clear in our minds that bleeding during a miscarriage has different ruling following its nature and the way the bleeding occurs. We conclude it as follows:

Hence, if it is confirmed by the medical experts that the bleeding is from the miscarried fetus, then it can be concluded that the blood discharged is ‘alaqah which obligates bath, and bleeding up to 60 days after that is nifas, which would make the prohibitions of women in menses like prayer and fasting is applicable on her. Wallahua’lam.

May Allah SWT give us understanding as well as strength to practice the Shariah the best we can. Ameen.