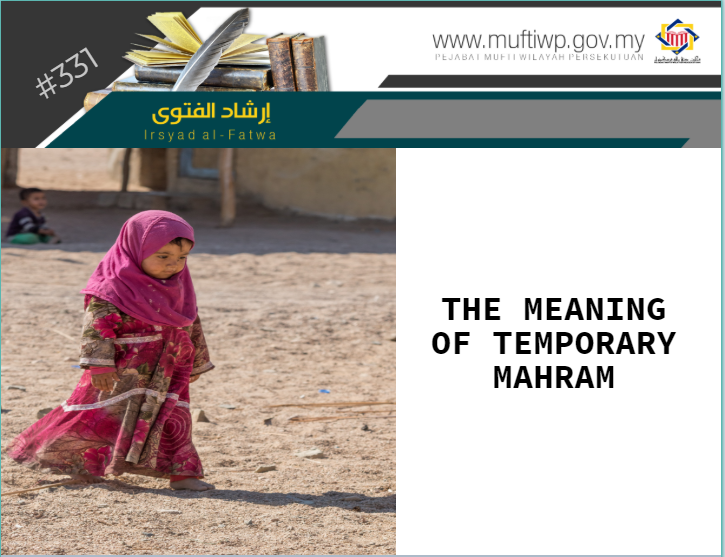 Assalamualaikum Dato’ Seri SS Mufti. What is meant by temporary mahram and the rulings related for those who are categorized as such?

Literally, there are several definitions for the word mahram. Among them, we simplify them into two points:

Whereas according to jurists, the term mahram means: “A person who is prohibited for us to marry, where the prohibition is al-ta’bid (forever) due to permissible reasons not for their honor nor is it because of an obstacle that could be removed.” Refer Kaasyifah al-Saja, Nawawi bin ‘Umar (pg. 114).

In explaining the meaning of the sentences in the above definition, we detailed it as the following:

For the phrase “the prohibition is al-ta’bid (forever)” means: It does not include sisters of one’s wife. The same applies to one’s wife’s paternal and maternal aunt. The reason is, the prohibition is only when it is concurrent (which means both marriages with one’s wife and the wife’s sisters or aunts at the same time).

While the phrase “not for their honor” refers to the wives of the Prophet PBUH. The reason is, they are prohibited to be married to anyone else of this ummah including other prophets due to their honor.

The explanation for those who are considered as our mahram is stated in the statement of Allah SWT:

Imam al-Mawardi Rahimahullah cited the words of Imam al-Syafi’e, where he said:

The original condition by which a woman is considered one’s mahram is divided into two parts. First is nasab (lineage) and second, asbab (reasons), which is a result from marriage or breastfeeding (nursing). Refer Al-Hawi Al-Kabir, Al-Mawardi (9/196).

The implication of mahram in the category of nasab and asbab (marriage and breastfeeding) is as follows:

In other words, they are only prohibited to be married for the prohibition stated by Allah SWT:

“...and that (it is prohibited) you take [in marriage] two sisters simultaneously,”

Thus, if the wife dies, the wives’ sisters are no longer prohibited for the man to marry. This is what muaqqat (temporary) prohibition means.

The same is for a woman who marries a man. Then the husband’s brothers (older or younger brother) are prohibited for her to be married to temporarily (muaqqat).

To conclude, we would like to state that basically, there is no such term as temporary mahram, except a mahram due to three factors, which are; lineage, breastfeeding (nursing) or musaharah, which implications includes prohibition of marrying them, permissible to have physical contact and permissible to be alone with them.

However, there is temporary prohibition or also said as muaqqat prohibition in terms of marrying an individual in this category for a certain duration of time.

Thus, the implication of facing or socializing with those who are categorized in muaqqat prohibition, a person should cover his or her aurah the same way when the person is in front of other non-mahram. It is also prohibited for a person to be alone and have physical contact with them and they are permissible to be married if the obstruction for them to be married are removed.

Lastly, may Allah SWT give us the right understanding in this religion. Amin.