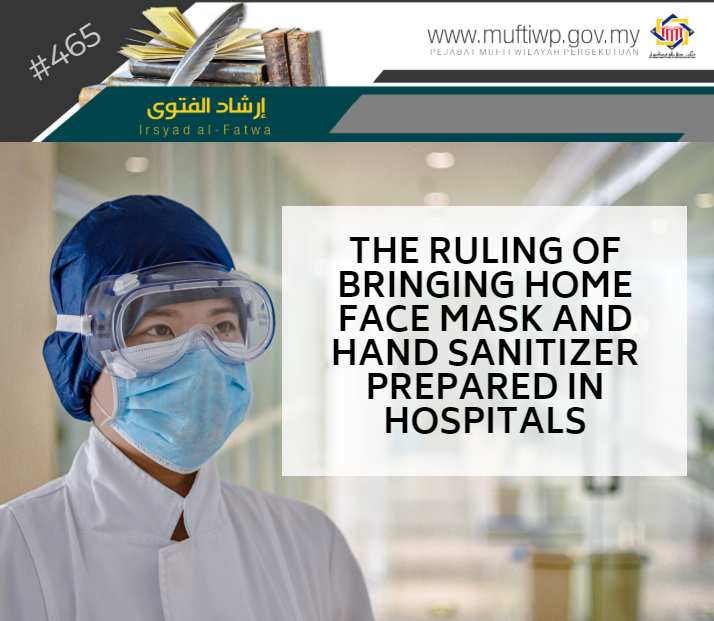 Assalamualaikum ustaz. May Allah save us all from the COVID-19 pandemic we are facing today. I am a friend to an officer of the COVID-19 in a hospital. He told me that there are some visitors who took some face masks and the hand sanitizers prepared by the hospital in the wards and bring them home. They are so selfish and does not think about others. If we are out of stock, what should we use? What makes me angry is when confronted, they blame on the shortage of hand sanitizer and face masks on the market as an excuse. Hope for an explanation from ustaz.

Among the attributes of a believer is someone who does not take something that is not his unlawfully. This is in accordance with a saying of Allah SWT:

O you who have believed, do not consume one another's wealth unjustly but only [in lawful] business by mutual consent.

Syeikh Mustafa al-Maraghi stated what is meant by the verse is taking something unjustly and not replacing it. It is also taken without consent or approval of the owner or is used in unnecessary places. The same for taking something that he needs without the consent of the owner. (Refer Tafsir Al-Maraghi, 5/16-17)

Coming back to the question presented, it is not wrong to use face mask and hand sanitizer equipped in the wards as they are for public use. However, the action of taking the bottle of hand sanitizers and some extra face masks home is something that is prohibited.

This is in accordance with the hadith narrated by Samurah bin Jundub. He said that the Prophet PBUH said:

Syeikh Abdurrahman Mubarakfuri stated that this hadith is specified for those who are truly in need. Most scholars do not permit one to milk other’s goat without his permission unless he is truly in need. He is not obligated to replace it according to some opinion while some scholars said he should replace it. However, he should not take it home. (Refer Tuhfah Al-Ahwazi Bi Syarh Jami’ Al-Tirmizi,4/518).

Looking at the situation in hospitals, face masks and hand sanitizers are for public use as a prevention measure to avoid the spread of germs and etc., but they are not permitted to be taken home or be used as personal items. In fact, in another narration, the Prophet PBUH said:

Whoever enters an orchard then let him eat, but not take any in his garment

Even this hadith is meant for those in need, but guidelines given by the Prophet PBUH is to take within one’s need. It is impermissible to take beyond his needs to the extent of taking it back home.

Al-Mawardi has given his commentary on this hadith. He stated that if it is placed in public areas, then it is in accordance with the ‘urf. There are two opinions on this. The first one is if is placed in a public place it is a sign of permission to be taken. So, it may be eaten by whoever passes it on the condition that it is not to be kept and taken home. The second opinion is; it may not be taken except with a clear consent from the owner of the garden. (Refer Al-Hawi Fi Fiqh Al-Syafi’i, 15/170).

What is mentioned by al-Mawardi is aligned with what is happening in hospitals. Pertaining to the permission, it does not arise as it is definitely placed to be used by the public. However, the problem is when they are taken home for those face masks and hand sanitizers are the hospitals’ property, in which it is permitted to be used during one’s presence in the hospital only. While taking home is not included under the clause of permission.

This matter is also in accordance with the famous Islamic legal maxim mentioned by Syeikh Ahmad al-Zarqa’:

“It is impermissible for one to act upon others’ property without his consent” (Refer Syarh Al-Qawaid Al-Fiqhiyah, pg 461)

This maxim also in accordance with the Prophet PBUH’s hadith:

“And it is not halal for one (to take) from his brothers’ property except what is appealing to his heart (within his consent).”

Hence, the usage of face mask and hand sanitizer prepared must be used according to the permission granted. In other maxim, it is stated:

“Each people who act upon others’ is bound with the maslahah”

According to this maxim of acting upon others’ property, one must act and use it in accordance with the consent given by the owner. He may not use is lavishly or thinking that it is his. (Refer Mausu’ah Al-Qawaid Al-Fiqhiyah, 8/592)

Hence, those who use the face masks and hand sanitizers in the hospitals must use it within the permission only. It is impermissible to be used for more than that.

In conclusion, taking and bringing home hand sanitizers and extra face masks is a prohibited action as it is considered as taking something owned by the authorities of the hospital. It is limited to the permission granted which is only for the user while being in the hospital. If one says that hand sanitizers and face masks are out of stock in stores, it is still not an excuse to take those things which are clearly the property of the hospitals. A maxim states:

The ends do not justify the means

To those who take and bring them home, remember that everything you take will be asked by Allah. Remember the hadith of the Prophet PBUH when he said that in the hereafter, each son of Adam will be asked on four things, among them is:

“…about his wealth and how he earned it and where he spent it on,”

Don’t oppress others just to fulfil our own selfish needs. You will be held responsible for everything you do. Fear Allah in every matter.

May Allah bless us with understanding in His religion. Wallahua’lam.