IRSYAD AL-FATWA SERIES 480: THE SAF ARRANGEMENT FOR THE PRAYER OF THE DECEASED DURING AN EPIDEMIC 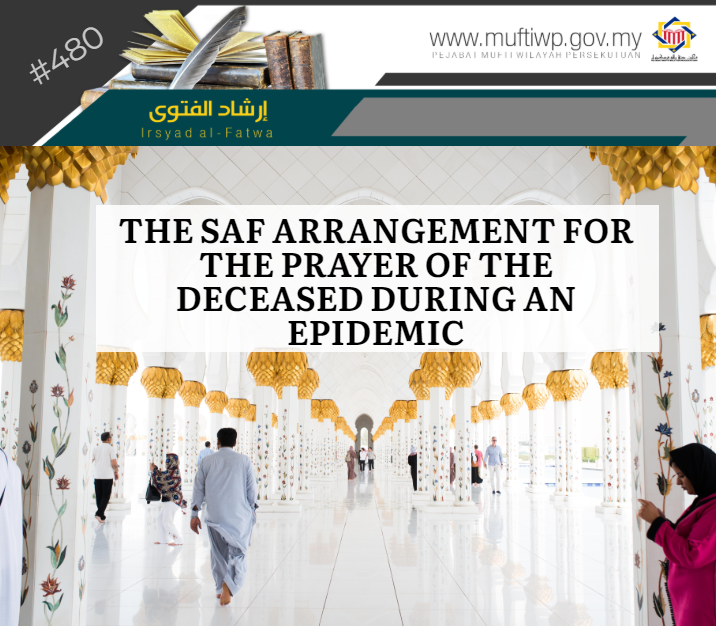 Is it permissible to perform the prayer for the deceased by distancing the congregation from each other in the saf? This method is said to take social distancing into account in order to stop the spread of an epidemic.

The first issue that should be resolved here is to take into account the suggestion issued by the authorities as to how to manage this epidemic especially from the Ministry of Health. Different countries employ different approaches in handling this issue, suitable for the control rate and statistics of the spread of the epidemic in the region. The authorities are responsible to ensure the latest information is shared and conveyed to the society are accurate and fast so that the spread of the disease could be contained.

The Ministry of Health through Datuk Dr Noor Hisyam Abdullah as the Head of Director of the Ministry of Health has issued a statement titled “MCO Media Statement 11th March 2020 – Current Situation of the Coronavirus 2019 (COVID-19) Infection in Malaysia” on 11th March 2020. When commenting on the issue of the spread of the pandemic among the attendees of Himpunan Jemaah Tabligh (Tabligh Congregation Assembly) held on 27th February until 1st March 2020, he suggested the following medical advice:-

“Following the COVID-19 incident in Brunei. MOH advised those who have attended the tabligh assembly to:

MOH also calls for all those who attended the assembly to cooperate with MOH to ensure that the COVID-19 infections are stopped from further spreading in the community.

According to the above statements, it can be understood that the suggestion for social distancing are for individuals who were involved in the Tabligh Congregation Assembly on the stated dates, regardless of whether they are experiencing symptoms such as fever, cough, sore throat, respiratory infection, or asymptomatic,  to keep a distance of 1 meter. Furthermore, this statement until today has not changed and there is yet any statement from the Ministry of Health regarding the implementation of social distancing for those who are not involved in the Tabligh Congregation Assembly.

A question arises; is it permissible to perform congregational prayer by implementing social distancing? If the state religious authorities issued a directive to suspend all congregational and Friday prayers in mosques and surau for a duration of time, for the purpose of cleaning, disinfecting and stopping the spread of the virus, thus the issue of social distancing in mosques should not arise for it cannot be performed following the directive from the authorities. The only exception is for the imam and bilal on the duty to maintain the mosque and call out the adhan.

However, if there is a need, for example, for individuals who are quarantined at home or in quarantine centers, then is it permissible to perform the congregational prayers with some distance between people in the saf?

For the ruling on this matter, we must come back to the original ruling of closing and filling the saf for prayer which is sunnah and it is one of the sunnah hai’ah, not a requisite nor sunnah ab’adh. In a hadith of the Prophet PBUH:

"Straighten your rows as the straightening of rows is essential for a perfect and correct prayer."

From Abu Mas’ud, he said:

“The Messenger of Allah (may peace he upon him) used to touch our shoulders in prayer and say: Keep straight, don't be irregular, for there would be dissension in your hearts.”

“Have the imam in the centre and close up the gaps.”

The same is stated in a hadith narrated by Abdullah Ibn Umar RA, where the Prophet PBUH said:

The original ruling for having gaps in the saf is makruh and it annuls the rewards of congregational prayer according to the above hadiths.

However, if there is a necessity to have gaps or distance between a person to the next person in the row of prayer (saf), then it is no longer makruh nor is it haram. This is according to the Islamic legal maxim:

“A necessity is in the place of exigent matters, in general, or specific level.”

This can be analogically deduced with the issue of praying while sitting that we have discussed previously, where it is a normal occurrence in other Muslim countries for chairs to be prepared in the back of the mosque for old and sick people. Thus, usul scholars proposed the maxim:

“The makruh ruling is abrogated when there is a necessity.”

Matters which are ruled as makruh in prayer are not considered as makruh when there is a necessity for it to be done. For example, in a hadith narrated by Abu Qatadah, the Prophet PBUH was:

“(The Prophet PBUH) was carrying Umama, daughter of Zainab, daughter of the Messenger of Allah (ﷺ). and Abu'l-'As b. al-Rabi'. When he stood up, he took her up and when he prostrated, he put her down, Yahya said: Malik replied in the affirmative.”

“Small actions are permissible in prayer, thus, two steps in prayer does not invalidate the prayer but it is prioritized to be avoided, except if there is a necessity, indeed, necessary actions are not makruh just as what the Prophet PBUH did. The above hadith also proves that it is permissible for an imam to pray at a higher place from the makmum, but it is makruh when either the place of the imam or the makmum is higher unless there is a need. Thus, if there is a need such as to teach the movements in prayer it is not makruh but it is sunnah according to this hadith. The same for a makmum who need to teach other makmums of the movements of the imam and needs a higher place to pray.”

Syeikh Dr Labib Najib Abdullah al-Adni, a scholar of madhhab al-Syafie from Yemen when asked the same question on his website [1] answered as the following:

“I answer – by asking the help from Allah Taala: The prayer is valid. This matter has been stated by our Syafi’iyyah scholars – may Allah bless them – when an imam assemble the makmum in one mosque then the iqtida’ (congregational prayer) is valid on the condition the makmum knows the change of movement of the imam and the makmum does not precede the imam in his place. This is the accurate depiction on this matter.”

However; does the person receive rewards for the congregational prayer performed?

“[And] it is sunnah [to straighten the saf and command it to be done] for whoever [and] also [who is the imam] whether he himself or a person who is given the authority [emphasized] to follow (the Prophet PBUH) and (avoid) the warning promised for those who leaves it (straightening the saf). It means to complete and fill the first saf and the subsequent saf, closing the gaps and everyone should stand beside each other in straight rows where no one’s chest are a little to the front, not on top of each other’s sides (stepping over each other) and is not quick in making a second saf before the first saf is filled and does not stand in one saf until the preceding saf is completed. If one of the above is contradicted, then it is makruh.” Intaha.

I (Dr Labib) said that according to fiqh perspective:

“Maybe the ruling of makruh is no longer applicable according to al-Allamah Ibn Hajar al-Haitami Rahimahullah Taala when it happens due to a necessity for it to be done. Wallahua’lam.”

Hopefully, this explanation will give an understanding to the questioner. We pray that Allah SWT will stop the spread of this disease and forgive our wrongdoings and return our society to a better state. Amin.