IRSYAD AL-FATWA SERIES 515: THE METHODOLOGY AND RULINGS OF PERFORMING THE EID PRAYER AT HOME 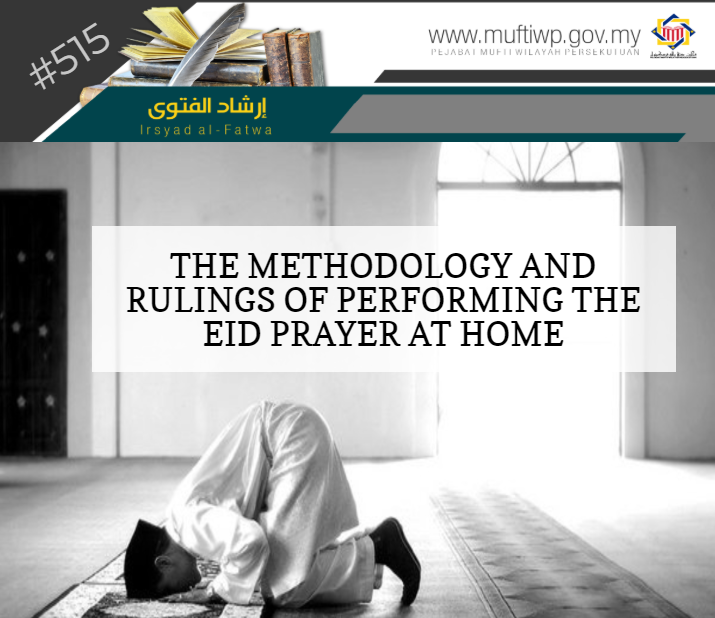 Assalamualaikum, since we are currently still under CMCO where most of us will not be able to attend the Eid prayer at mosques, I would like to ask the Mufti’s Office to explain the rulings and methodology of performing the Eidulfitri prayer at home. Thank you.

There are numerous evidences which state that performing Eid prayer is sunnah and not wajib. Among them is a hadith narrated by Talhah bin ‘Ubaidillah RA, where he said: “A man came and meet the Messenger PBUH and asked regarding Islam. Then, the Prophet PBUH replied:

"You have to offer five compulsory prayers in a day and a night (24 hours)."

The man asked, "Is there any more compulsory prayers for me?" Allah's Messenger (ﷺ) said,

"No, unless you like to offer Nawafil (i.e. optional prayers)."

Likewise, according to a hadith narrated by ‘Ubadah Ibn al-Somit RA, he said, the Prophet PBUH said:

“Allah the Majestic and Mighty has written five prayers for mankind, and whoever does them and does not waste anything of them by making light of what is due to them, there is a pact for him with Allah that He will admit him into the Garden. Whoever does not do them, there is no pact for him with Allah. If He wishes, He punishes him, and if He wishes, He admits him into the Garden.”

Thus, according to the above narrations, they clearly show that other than the five obligatory prayers, other prayers are included as sunnah prayers and among them, the Eidulfitri prayer is also included.

Basically, Eid prayer is encouraged to be performed in open land so that it can be attended by crowds of Muslims, subsequently showcasing the eminence of Islam. Thus, it is encouraged for all Muslims from among men, women, children, maidens, purdah-observing ladies and even menstruating women (to watch) to attend the Eid prayer, regardless whether it is held in open lands or mosques. This is in accordance with narration by Ummu ‘Atiyyah R.Anha where she said:

“He (the Messenger of Allah) commanded us that we should take out unmarried women and purdah-observing ladies for 'Id prayers, and he commanded the menstruating women to remain away from the place of worship of the Muslims.”

Coming back to the question asked, we would like to state that the ruling of performing the Eid prayer at home due to our current situation where we are experiencing the Covid-19 pandemic is the same as what has been discussed by scholars regarding those who missed the Eid prayer performed at the mosques, is it permissible for them to perform it at their houses if there is still time for it?

The following we state several opinions of jurists regarding the issue of performing the Eid prayer at home. Imam al-Nawawi said:

The opinion of the madhhab is as stated in contemporary books of which all of them state that it is sanctioned for an individual to perform it at his home or other places.

Thus, according to the above statement, among the wisdoms that can be taken from it are two:

The next question is when a person performs the Eid prayer alone, does he need to read the khutbah (sermon)? Then, the following is the statement from Imam al-Nawawi who said:

And we hold to the opinion of the madhhab (it is permissible to perform the Eid prayer alone), then he can perform it alone without the khutbah according to the sahih opinion.

While, regarding performing the Eid prayer in congregation at home, we would like to state that the ruling is the same as performing it alone. It is permissible to be performed at home in congregation. This permissibility is taken from the general hadith narrated by Zaid bin Tsabit RA, he said the Prophet PBUH said:

"The most excellent prayer of a person is (that which he prays) in his house except that which is prescribed (the five congregational prayers)."

Thus, this hadith generally states that sunnah prayers which include Eid prayer is permissible to be performed at home. Although, if the situation is different, when there is no pandemic, then Eid prayer is prioritized to be performed in open lands and mosques in congregation for it is a part of the eminences of the Muslim ummah.

Hence, when we say that it is permissible for Eid prayer to be performed in congregation at home, is it also necessary for the khutbah to be read? In this matter, we say that the khutbah is encouraged which means it is sunnah for one of them (the congregation) to read the Eid khutbah.

The following we share the methodology of performing the Eid prayer at home:

People recite the takbir on Eidulfitri when the sun sets on the night of Eid alone and in congregation in every situation until the imam exits to perform the Eid prayer, then they stopped the takbir.

Whereas the sighah (form) for the Eid takbir is as generally known as stated by Imam al-Nawawi:

This is according to a hadith narrated by al-Nu’man Ibn Basyir RA, where he said:

"For the two Eid and the Friday prayer, the Prophet would recite: Glorify the Name of your Lord, the Most High, and Has there come to you the narration of the overwhelming? And sometimes they would occur on the same day, so he would recite the two of them."

The number of takbir is according to a hadith narrated by ‘Abdullah Ibn ‘Amr Ibn al-‘Ash RA, where he said:

“The Prophet (ﷺ) said the Takbir seven times and five times in the ‘Eid prayer.”

This is in accordance with a hadith narrated by Ibn ‘Umar R.Anhuma, he said:

"Allah's Messenger, Abu Bakr, and Umar would pray during the two Eid before the Khutbah, then they would give the Khutbah."

To close, after analysing the above evidences and arguments, we end this statement with the following points:

Whereas, it is unnecessary for a person who performs the Eid prayer alone to give the sermon for there is no benefit from it.

Lastly, we pray to Allah SWT to be given the correct understanding in religion. Amin.