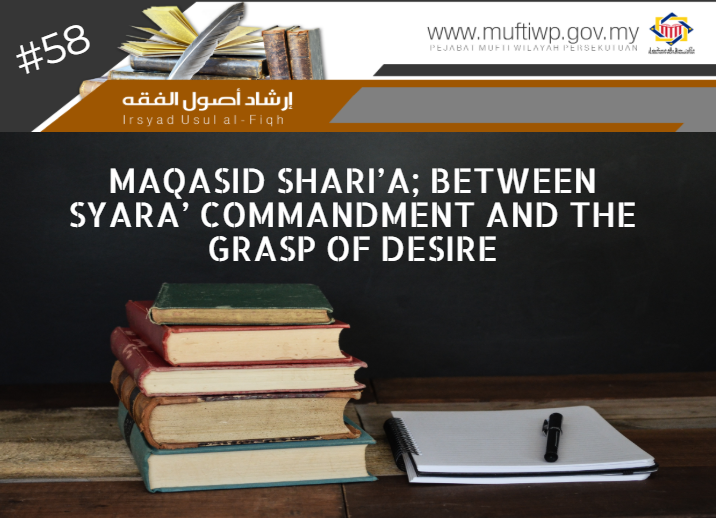 Imam al-Shatibi has underlined one of the main purposes of Shari’a which is al-Qasdu fi Dukhul al-Mukallaf tahta as-Syari’ah which set the obligation for men to be under the guide of Shari’a and to be included under all of its rulings and laws, as well as the obligation for them to constantly practice it, apart from stating that this Shari’a is applicable and relevant to every human being, and indeed, determining the maslaha of humans solemnly belongs to Allah SWT as the Shari’, and not to the desire of the human being themselves.

While al-Qasdu al-Ibtida’ie has put Shari’a as the way of life/ laws/ rules which encompass the happiness in this world and the hereafter. While these syara’ purposes state that humans as a whole should obey and abide by the Shari’a and not to their own desire.

In other words, the Maqasid of freeing humans from his own desire complements the Maqasid ibtida’ie, which is to achieve the maslaha for people. This is because, the maslahah, even if it is possible to be achieved by following their desire, will only be achieved completely and perfectly through the rulings of syara’. And the completeness of this maslaha will not be done unless by freeing humans from the grasp of desire, and the true maslaha is only what is aligned with syara’. (Refer Nazhariyyah al-Maqasid ‘inda al-Imam al-Syatibi pg. 157)

Al-Imam al-Syatibi has stated on this at the beginning of this chapter:

(One of) the purposes of Shari’a is to free humans (a mukallaf) from the grasp of his desire, so they can be the servant to Allah SWT solemnly and by choice, the same way they will do it by force. (Refer al-Muwafaqat, 2/289)

Al-Imam al-Shatibi, like always, will present several dalil from the Quran and as-sunnah to support his claim in his book and to apply his principle that Maqasid Shari’a is built from the method of al-istiqra’ (inductive), which is a process that gather all relevant dalil that contain different aspects and purposes- whether it is zhahir, mutlaq, muqayyad, kulliyah or juz’iyyah in different variations in every chapter of Fiqh ruling.

Besides, according to him, qara’in al-ahwal (situational indications) should also be considered, whether it is stated in nas (manqulah) or not (ghairu manqulah). Only by this way, according to al-Imam al-Shatibi, a conclusion of qath’ie ruling (a certain and absolute) may be affirmed. (Refer al-Muwafaqat 1/18-19)

The dalils presented by al-Imam al-Shatibi are divided into three types:

And I did not create the jinn and mankind except to worship Me.

O mankind, worship your Lord, who created you and those before you, that you may become righteous -

Worship Allah and associate nothing with Him

But as for he who feared the position of his Lord and prevented the soul from [unlawful] inclination, (30) Then indeed, Paradise will be [his] refuge. (31)

Nor does he speak from [his own] inclination. (3) It is not but a revelation revealed, (4)

Have you seen he who has taken as his god his [own] desire, and Allah has sent him astray due to knowledge

But if the Truth had followed their inclinations, the heavens and the earth and whoever is in them would have been ruined.

He also stated an athar al-sahabah narrated by Ibn ‘Abbas, which he said:

Allah SWT never mention on desire in His book, unless He also state on its wickedness. (Refer Raudhatul Muhibbin wa Nuzhatul Musytaqqin 1/469 by Ibn al-Qayyim and Zamm al-Hawa pg. 12 by Ibn al-Jauzi)

Therefore, it is wrong for one to have the opinion that Shari’a is shaped and established in accordance with human desire and their wants. Shari’a wants maslaha for humans, and abstain them from mafsada, because it is what originally wanted by syara’, and not because Shari’a ‘obeys’ humans. Al-Imam added, Shari’a and desire contradicts one another, and obeying the desire means refuting the truth (al-haqq). So, it is clear, according to him, these dalils indicate that Qasdu al-Syari’ wants humans to not obey their desire, and al-Imam concluded it by saying:

“It is syara’ commandment to be away of the grasp of desire, and to enter the circle of worshipping the God.” (Refer Al-Muwafaqat, 2/290-294)

Maqasid Shari’a or Maqasid of Desire

In the time where the science of Maqasid starts to be spoken around lately by so many people, misunderstanding and misconception inevitably will appear. There is a worry – in fact, it has already took place – when there are people who use the argument of Maqasid Shari’a as a justification to abandon and belittle the purpose of syara’ evidences. These group of people are labeled by Dr Yusof al-Qaradhawi in his book Dirasah fi Fiqh Maqasid as-Shari’a as ‘al-Mu’atthilah li an-Nusus bi ismi al-Maslahah wal Maqasid’, which is those who abandon the syara’ evidences in the name of maslaha and maqasid. They, al-Qaradhawi said, are ignorant of the Shari’a, did not study Maqasid Shari’a in its true discipline, then they speak on Maqasid without knowledge, except that they are influenced by the westernization and modernity. (Refer Dirasah fi Fiqh Maqasid as-Syari’ah: Bainal Maqasid al-Kulliyyah wa an-Nusus al-Juz’iyyah, pg. 83-95)

These people only speak on Maqasid in terms of al-Qasdu al-Ibtida’ie, which is the purposes of Shari’a to protect the maslaha of humans, but at the same time abandon the other sides of the Maqasid itself.

For example, one of the purposes of Shari’a discussed above, which is al-Qasdu li at-Taklif, in which Shari’a wants people to obey, abide by and submit to syara’ commandment, but we see many people are calling towards something which contradicts the Shari’a by using Maqasid Shari’a as the claim! This is preposterous.

Between human rights and desire

The same issue was brought by Dr Ahmad ar-Raysouni when he gave his comment on the issue of human rights, in which some modern human right activists seem to abandon one important side of humanity, which is the spiritual and religious dimension. Their fight makes it looks like human rights are merely a set of human desires, material aspiration, physical needs as well as their rights in terms of politics and law.” (Refer Huquq al-Insan Mihwar Maqasid al-Syari’ah, pg. 45)

This can clearly be seen in activists who fight for the freedom of Lesbian, Gay, Bisexual, Transgender and Queers (LGBTQ) rights as well as those who oppose the khalwat and adultery prevention squad which is done by the religious authorities at large. They are confused between defending human rights and obeying their desire, in which they believe that they have the right to follow their twisted desire, and have the right to go on with their promiscuity culture, just because they want to do so. ‘I want to do it therefore it is my right to do it, and no one can stop me from doing it’ is their stand about their human rights.

Their concept of human rights is very confusing. Right, comes from the Arabic word haqq, which means truth, or matters which are right and wrong. In fact, in English, right also has the same meaning. So, even in linguistic manner, we already able to uncover the concept of human rights, which is by doing the right thing, and in accordance with the aspects of humanity, not according to what our desire wants.

The excerpts on human rights activist above may also be found in his writings in other books when he said on freeing humans from worshipping their desire in his article Maqalatun fil Hurriyyah, in which he stressed that obeying desire is slavery, not freedom (itba’ al-hawa ‘ubudiyyah la hurriyyah). This statement most probably is meant for the group of freedom and human rights activists who have no clear claim; who only fight for the material aspects without focusing on the spiritual dimension which in fact is more important.

He also added that indeed, Shari’a tries to drive humans towards goodness and prosperity, even if it contradicts with their desire; Shari’a also prevent any harm from befalling them, even if they themselves want that harm. (Refer Maqalat fi al-Hurriyyah pg. 15-16)

We should look back to the advice of the Prophet Muhammad PBUH in which he said in a famous hadith:

Consequently, we should not be confused between the principles of Maqasid Shari’a and the calls towards desire disguised as Maqasid. We should also beware of quoting the science of Maqasid partly while leaving the other part.