IRSYAD AL-HADITH SERIES 470: THE STATUS AND VIRTUES OF THE UMMAHATUL MUKMININ IN ISLAM 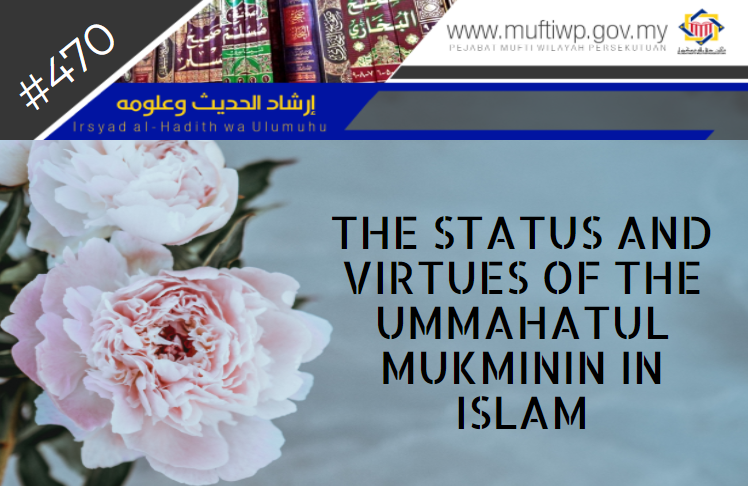 “So, they who have believed in him, honored him, supported him and followed the light which was sent down with him - it is those who will be the successful.”

Syeikh Mustafa al-Maraghi said the meaning of those who believed in him from above verse are those who believed in their ummiy (illiterate) Messenger when he was sent. They helped him, prevent and defended him from those who try to hurt the Prophet PBUH for inside themselves is the attribute of honouring the Prophet PBUH. This is unlike the people who defended their ruler all the while at the same time hating and disliking their ruler. They helped the Prophet PBUH through various means, whether it is through their speech or writing and they also follow the light of truth which is the Quran which was revealed when the Prophet PBUH was sent. (Refer Tafsir Al-Maraghi, 9/83)

Through this verse, thus, it is haram for anyone to degrade and insult the Prophet PBUH in any way. This is explained by Allah SWT in the Quran. Allah SWT states:

“And among them are those who abuse the Prophet and say, "He is an ear." Say, "[It is] an ear of goodness for you that believes in Allah and believes the believers and [is] a mercy to those who believe among you." And those who abuse the Messenger of Allah - for them is a painful punishment.”

Syeikh Tohir Ibnu ‘Asyur said that this verse is a reminder for those who hurt the Messenger PUH with any means including insulting him. Those who did so will be punished by Allah SWT in this world and the hereafter. (Refer Tahrir Al-Ma’na Al-Sadid Wa Tanwir Al-‘Aqlu Al-Jadid Fi Tafsir Al-Quran Al-Majid, 10/136)

“Indeed, those who abuse Allah and His Messenger - Allah has cursed them in this world and the Hereafter and prepared for them a humiliating punishment.”

Thus, any form of insult, whether it is in the form of writing, speech, paintings, drawings and others is considered as dishonouring or degrading the Prophet PBUH as the Messenger of Allah SWT. We have discussed regarding the ruling of insulting the Messenger PBUH in our previous articles. Among them are:

Syeikh Sya’rawi when commenting on the verse said every wife of the Prophet PBUH is the mother of a believer. Hence, we should not only honour and treat them as the wives of the Prophet PBUH but also as our mother. (Refer Tafsir Al-Sya’rawi, pg. 3464)

Through this verse, the wives of the Prophet PBUH should be honoured as a mother would. She should not be insulted or even cursed as what is done by the Shiites towards Aisayh R.Anha. A rational person would never degrade or insult his own mother. This is explained by al-Baidhawi when he commented on the verse. He said:

“The status of the wives of the Prophet PBUH is the same as a mother is and should be honoured and dignified.” (Refer Anwar Al-Tanzil Wa Asrar Al-Ta’wil, 3/129)

Furthermore, Allah SWT did not call the wives of the Prophet PBUH as women but Allah SWT calls them with the best of title. This is an acknowledgement of their status and honour. Allah SWT states:

“O wives of the Prophet, you are not like anyone among women.”

Al-Alusi stated in his commentary that the wives of the Prophet PBUH is absolutely different from other women during their time. They receive two honours, first as the wife of the Prophet PBUH and second as the mother of the believers. (Refer Ruh Al-Ma’ani Fi Tafsir Al-Quran Al-‘Azim Wa Al-Sab’i Al-Mathani, 11/185)

The call يَـٰنِسَآءَ ٱلنَّبِىِّ which means ‘O wives of the Prophet,’ clearly proves their honour. The reason is just by being related to the Prophet PBUH is a great advantage and honour.

“And abide in your houses and do not display yourselves as [was] the display of the former times of ignorance. And establish prayer and give zakah and obey Allah and His Messenger. Allah intends only to remove from you the impurity [of sin], O people of the [Prophet's] household, and to purify you with [extensive] purification.”

Ibnu Kathir said the verse especially the ending of the verse is revealed specifically to the wives of the Prophet PBUH. (Refer Tafsir Al-Quran Al-‘Azim, 3/584)

Any attempt to deny the status of Ummahatul Mukminin as ahlul bait is something that clearly contradicts what has been stated by Allah SWT in the Quran.

“Among the matters which differentiates ahli sunnah is by including the taradhi phrase (the phrase is either رضي الله عنه or رضي الله عنها ) for all the wives of the Prophet PBUH who are the mother of all believers. They are free and pure from committing anything bad.” (Refer Lum’ah Al-‘Iktikad Al-Hadi Ila Sabil Al-Rasyad, pg. 31)

Not only are they the wives of the Prophet PBUH but they also helped and contributed great ideas for the betterment and maslahah of the Muslim ummah. This can be seen in an incident which took place in the 6th year of Hijrah during the agreement of the Hudaibiyah treaty. When this treaty was signed between the Quraisy musyrik and the Prophet PBUH in Hudaibiyyah, the Porphet PBUH instructed his companions:

“Get up and' slaughter your sacrifices and get your head shaved.”

"O the Prophet (ﷺ) of Allah! Do you want your order to be carried out? Go out and don't say a word to anybody till you have slaughtered your sacrifice and call your barber to shave your head."

More than that, they are also responsible in spreading and conveying the hadith and knowledge from the Prophet PBUH. Some of them are referred to by the other Companions. Each one of them played a role of teaching knowledge especially the hadiths of the Prophet PBUH. The one who stands out he most is Saidatina Aisyah R.Anha. Urwah bin Zubair said:

“I did not find anyone more knowledgeable in Fiqh, medicine and Arabic poetry than Aisyah.” (Refer Usdu Al-Ghabah Fi Ma’rifah Al-Sahabah, 1/1384)

She is also among those who memorized the hadiths of the prophet PBUH where she memorized 2210 haidths.

Not only Aisyah, other ummahatul mukminin also played a role in teaching others. The Companions would always refer to them in any religious issues that arises. (Refer Ummahatul Mukminin Fi Madrasah Al-Nabawiyah, pg. 5)

To conclude, ummahatul mukminin has a high status and greatly honoured in islam. Thus, only the ignorant would insult, degrade or dispute against the mother of the believers. It is also the obligation of every believer to learn and know about every wife of the Prophet PBUH. Insulting them is the same as insulting the Prophet PBUH himself.

May Allah SWT assemble us together with our beloved Prophet PBUH in Paradise. Wallahua’lam.